Tax, VAT and excise duties are below target – will spending weaker further after Brexit? 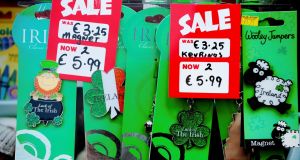 The old warning applies: never read too much into one month’s figures. However, there are some trends of note in the latest exchequer returns. Overall tax returns came in below target for the month of July, and while this in part reflects the notorious volatility of corporation tax payments, it also shows VAT and excise duties coming in below expectations. In other words consumer spending for the month was a bit lower than Department of Finance forecasters had anticipated.

VAT receipts in June did remain a healthy 6 per cent ahead of the same month in 2015. The fact that the total came in below expectations did suggest some softening in the rate of spending growth, however. This would be in line with the KBC/ESRI consumer sentiment survey, which showed confidence edging down in the spring. These was no particular reason for this beyond – the researchers speculated – a feeling that despite all the talk of recovery, household finances are only, in most cases, making small gains.

Whatever the reason, it has had some impact on spending. VAT was €61 million below target for the month and was thus a key contributor to the overall €98 million monthly shortfall. A €25 million shortfall in excise duty was another key factor.

What are the Exchequer Returns?

The monthly exchequer returns provide details of taxes collected by the Exchequer and government spending. They are one of the most up-to-date indicators of activity in the economy. The figures for each month are published on the second working day of the following month.

The figures give details of taxes collected in all the main areas – such as income tax, VAT, corporation tax and so on. They also show how much each Government department spent. The key comparisons are usually with the same month last year, and with the targets set by the Department of Finance.

The VAT receipts counted in the July figures reflected shopping trends in May and June, just before the Brexit vote. The question now is whether consumer spending and thus taxes could weaken further after Brexit. The updated KBC/ESRI consumer sentiment figures, published yesterday, suggest sentiment remained reasonably resilient in the immediate wake of the Brexit vote. The next key marker of this will be in the September returns, just before the Budget, when VAT reflecting shopping in July and August will fall due.

Overall tax receipts for the year remain well ahead of target in the first seven months. Income tax is on target, reflecting rising employment. Corporation tax remains way ahead of expectations, due to significant payments earlier in the year, though it is volatile. The picture remains of a growing economy with activity running ahead of 2015 levels.

However, the figures do raise a couple of question marks. One is whether consumer spending will continue to ease back after Brexit, damaging the exchequer figures. The other, related question is whether the long period of tax figures coming in consistently ahead of target may be coming to an end. It is too early to answer either with any confidence, but the run-up to the Budget has just got more interesting.