State’s shareholdings in Irish banks could last another decade

Donohoe indicates opportunity to sell off more shares in AIB, Bank of Ireland and Permanent TSB has been stymied by crisis 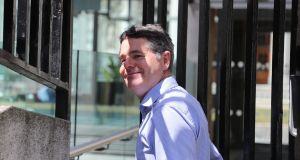 The State is likely to remain a shareholder in the three domestic banks for possibly another decade having missed out on the opportunity to sell its holdings when market valuations were higher, Minister for Finance Paschal Donohoe indicated on Monday.

Speaking at the launch of the National Treasury Management Agency’s (NTMA) annual report, Donohoe stopped short of saying he had made a mistake by not selling more shares in the lenders two years ago as the agency had advised.

Back then shares in AIB were trading at over €4 as opposed to €1 today. The State still owns 72 per cent of the bank.

“If that sale had gone ahead we would have got a dividend into the State that we’re not able to get now,” Donohoe told the media. “I think we will be a shareholder in our banks for a number of years to come,” adding that share valuations that look fixed now can change quickly.

“At some point in the future it will be open to a government to make further share sales in our banks that will be beneficial to the taxpayer, but that moment isn’t happening today or tomorrow.”

Ten years on from the crash and the State remains a key player in the financial sector, holding majority stakes in AIB and Permanent TSB (75 per cent) and a 14 per cent holding in Bank of Ireland after crisis-era bailouts.

In 2018 the head of the NTMA, Conor O’Kelly, urged the Government to sell off more of its holdings following a successful stock market sale of AIB shares in 2017 which raised €3.4 billion.

But the Government held off, and it now seems that the opportunity has passed, with bank shares taking a hammering in the current crisis.

The State and the banks are uneasy bedfellows. Donohoe has refused pleas from the sector to lift the cap on bankers’ pay and to remove the punitive rate of tax on bonuses, which the banks claim has been responsible for an exodus of certain high-ranking staff.

Thanks to the pandemic that picture won’t be changing anytime soon.