Cantillon: Newspapers and magazines are running out of time, webinar hears 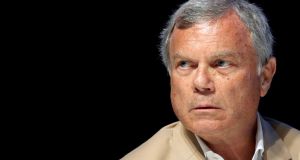 Even by the standards of webinars on the future of media (with some Covid-19 economic devastation for context), Friday’s event with advertising boss Martin Sorrell and British journalist-turned-media executive Will Lewis – hosted by communications agency Powerscourt – was heavy on the matter-of-fact gloom.

“If you are looking for some Friday afternoon cheer, you have come to the wrong place,” said Lewis, as he declared himself “very, very bearish” in the short term on the UK economy.

This was after Sorrell, now at the helm of London-headquartered digital marketing company S4 Capital, but better-known for his long stint leading advertising giant WPP, settled upon the “reverse square root” as the shape that will best trace the economic trajectory in the months ahead. Some sectors might manage the more favourable “U” and “V” recoveries, but others in travel and leisure will be more akin to the dreaded “L”.

Although the second quarter should be the trough for advertising spend, any later upticks are unlikely to sufficiently compensate stricken media companies, Sorrell forecast. Covid-19 will instead hasten the “annihilation” of print newspapers and magazines.

“I don’t know the date, but it has brought the date forward,” he said. “Newspapers and magazines in their printed form – gone. I would put it as dramatically as that.”

And he wasn’t exactly bullish on the outlook for linear broadcasters either.

Pressure will soon build on media holding companies to accelerate their switch to digital assets and set themselves free of their “analogue” ones, he suggested. This process would not be unlike the manner in which lenders were split into viable “good banks” and toxic “bad banks” in the wake of the financial crisis – a shudder-inducing analogy for any industry.

Lewis, who has just stepped down as chief executive of Wall Street Journal publisher Dow Jones and was linked with the now filled post of director general of the BBC, valiantly tried to introduce a note of optimism, mentioning that several publishers had enjoyed a Covid-19 uplift in subscription numbers. But there was little escaping the “serious crisis that is unfolding very rapidly”, he concluded.

“Media companies that have been around for a long time and didn’t get a chance to fix their roofs while the sun was shining are going to pay the price,” he said. “It’s three or four minutes to midnight.”