China’s economy continues to inch out of coronavirus slump

Industrial output rose in May, but retail sales fell 2.8% compared to a projected 2.3% drop 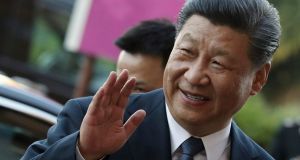 China president Xi Jinping. The gradual recovery in the country’s economy is still mainly driven by the supply side thanks to continued stimulus policy, while demand remains weak

China’s economy continued to inch out of the coronavirus slump in May, though a reliance on industry amid sluggish consumer demand underlines the fragility of the recovery as further infections appear.

Industrial output rose 4.4 per cent from a year earlier, versus a median estimate of a 5 per cent expansion. Retail sales fell 2.8 per cent, compared to a projected 2.3 per cent drop.

Fixed-asset investment declined 6.3 per cent in the first five months, versus a forecast 6 per cent drop. The surveyed urban jobless rate fell to 5.9 per cent from 6 per cent the previous month.

A jump in cases in Beijing over the weekend has raised fears of a resurgence of the pandemic in China, threatening to blunt recent government efforts to revive the economy.

Beijing has shuttered the city’s largest fruit and vegetable supply centre and locked down nearby housing districts after nearly 100 people associated with the wholesale market tested positive for coronavirus.

The Monday data showed the gradual recovery in China’s economy was still mainly driven by the supply side thanks to continued stimulus policy, while demand remains weak. Industrial production has rebounded from a contraction in February, while private consumption is still shrinking and investment has not recovered.

“The recovery is on the track while mixed performance can be observed everywhere – manufacturing still better than services, cars better than catering,” said Zhou Hao, an economist at Commerzbank in Singapore. “However, the virus concerns will cloud the economic outlook.”

While highlighting the moderate improvements in May and reiterating the pledge to strive to achieve full-year economic and social development goals, the statistics bureau also acknowledged downside risks.

“The overseas epidemic situation and the world economic situation have become more severe and complicated, and the stable operation of the domestic economy still faces many risks and challenges,” the bureau said in a separate statement.

With the rest of the world in recession, exports dropping and China’s relations with the US continuing to worsen, a rebound relies to a large extent on domestic consumption.

“It’s quite clear that production has recovered pretty nicely, but the consumption as well as investment actually are lagging behind,” Shen Jianguang, chief economist at leading online retailer JD.com said on Bloomberg television after the data.

“So it’s the lack of demand that’s the main problem of the Chinese economy right now.”

Output in the consumer goods sector shrank 0.6 per cent compared with the 0.7 per cent increase last month, the statistics bureau said, while export orders were “insufficient”.

The value of delivered exports shrank 1.4 per cent, and dropped more than 10 per cent in some important sectors.

The People’s Bank of China supplied banks with 200 billion yuan ($28bn) in fresh liquidity on Monday, while letting some previous loans expire, leaving the financial system needing further injections if a looming cash crunch is to be avoided.

Economists say the chance for a reserve ratio cut in the near-term is increasing after the move. – Bloomberg

1 ‘Darth Vader’ masks developed in Ireland can help meat-plant workers
2 Spare me the city-dweller’s longing for a rural idyll
3 MSD buys Takeda biologics plant in Dunboyne
4 ‘Saudi Arabia is where the opportunities will happen in future’
5 Depfa sees fresh bid interest from Apollo and JC Flowers
6 Over 200 Covid-related complaints lodged with financial ombudsman
7 Welltel acquires Intellicom in €5.5m deal
8 Irish company insolvencies expected to spike near crisis level of 1,700 next year
9 Science of selling crucial to post-Covid recovery
10 ‘It’s not about beating the life out of a price for the sake of it’
Real news has value SUBSCRIBE