Bigger role for the State in new programme – but how will we pay for it ?

Analysis: Programme for government sets a new direction, but is light on the details 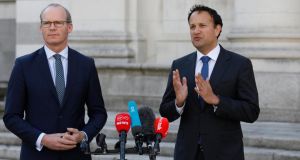 The economics of the programme for government are driven by the extraordinary uncertainty thrown up by the coronavirus crisis. It is full of policy commitments, though most are general and few are tied down in numbers. And it is light on detail regarding how the bigger role for the State envisaged in the programme will be paid for in the years ahead.

The programme sets priorities and new directions, but if it is approved there will be a lot still to play for when the new government takes office. The path of the coronavirus crisis will frame these decisions – and who knows where we will be by the autumn? By necessity, this is more a policy platform than a fully-developed and costed plan. The latter will come in October with a publication of a national economic plan alongside the budget.

In the short term, the focus will be on an economic rescue programme after the coronavirus hit. A promised economic stimulus to be launched next month can be funded with higher borrowing. But in time the next administration will have to work out how to pay for its longer-term plans and more expansive State services. The programme does not spell these out in detail – there are no commitments in terms of numbers of healthcare staff, waiting lists, pupil-teacher ratios and so on. But the direction of travel is clear.

While the document commits to moving the budget back towards a “broadly” balanced position over the term of the next government, using new taxes and spending cuts if needed, there is little detail on where new revenue might be raised. When recovery starts to set in, there will first be a goal of eliminating borrowing to cover day-to-day spending. When incomes start to rise, the government hopes to have enough cash to index the income tax system to ensure people don’t automatically get caught with a higher tax burden when pay rises. This indexation didn’t happen in the outgoing government, so we will have to wait and see.

The first big move of the next government will a“July stimulus” of the economy , aiming to get economic growth going by boosting investment, focusing on some key infrastructure projects, supporting business investment and a retraining programme. This stimulus route is the economically recommended strategy after the huge Covid-19 hit. The path of the virus will be crucial in determining its success.

A wider economic review is then to get under way, under the aegis of the Department of the Taoiseach, as well as forums on various key sectors, while legislation is passed to get promised business supports up and running. There is a commitment to consider additional measures to help the worst-hit sectors, such as tourism, hospitality and entertainment, but a recognition that money will need to go where recovery looks possible. Tensions lie ahead here in deciding which sectors get help – and which don’t.

The heavy lifting is to come in a new national economic plan which will be published alongside the budget in October and will set the course for the government. This will outline how the public finances are expected to evolve. Much will depend on the path of the Covid-19 virus in the meantime – the next government could be seeing a recovery under way by the autumn, or more uncertainty.

In terms of investment spending, one of the few detailed commitments is the retrofitting of 500,000 homes, a costly exercise where households will be offered some financial package to help.A review of the national investment programme will likely mean some projects are long-fingered as others in areas such as public transport, energy and housing get priority.

Tough calls will come in trying to work out how to pay for higher current spending – the recurring annual bills – in areas such as health, childcare and education. Some key decisions are kicked into commissions and committees, including one to look at the pension age issue and another to examine the future of tax and welfare policy. At some stage the calls will have to be made. Apart from the carbon tax, the document says other taxes which would be looked at to reduce the deficit are those designed to change behaviour – such as a sugar tax or one on plastics. These won’t produce much cash.

There will be controversy over the carbon tax plan and tougher decisions and rows ahead on how to pay for the agenda set out in the programme. Still, as they seek approval from their parliamentary parties, the leaders will reckon that these are rows for another day.

Facebook opens accelerator programme for e-commerce start-ups 12:24
How safe is it to go back to the office? 12:05
Twitter faces $250m fine over new data privacy issue 11:32
Virgin Media Television expects to lose a quarter of ad revenue in 2020 11:17
Irish factory activity rebounds in July from lockdown lows 10:38

1 More than 40% of help-to-buy recipients already had deposit
2 How safe is it to go back to the office?
3 Most workers now expect choice to work from home part-time
4 PTSB slides into loss amid €75m bad-loans charge
5 Elderly parents living in property you own will save you on capital gains tax
6 Owner of Dundrum Town Centre to sell prized assets
7 56 financial firms entered or expanded Irish operations in 2020
8 Cinema tensions laid bare by deep crack in theatrical release windows
9 Twitter faces $250m fine over new data privacy issue
10 Google unveils ‘budget’ Pixel 4a after Covid delay
Real news has value SUBSCRIBE