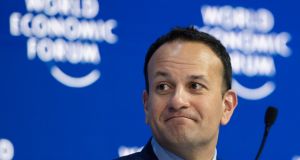 The Republic is “forever closing loopholes” in our tax system, Leo Varadkar told a panel of European leaders at Davos on Thursday. Mr Varadkar defended the State’s low-tax regime, saying the best way to formulate international tax policy is through the Organisation for Economic Co-operation and Development’s base erosion and profit shifting (Beps) project.

“I’ve a very simple view on this,” he said. “I think companies should pay the taxes they owe, in full and where they are owed.”

He said the Republic’s record corporate tax haul last year was partly down to Ireland having “closed down things like the Double Irish” tax-avoidance strategy used by some large multinationals, as well as a loophole where groups could be resident in Ireland but stateless for tax purposes.

“We’re forever closing loopholes that exist in our tax system and we do that through the OECD and Beps,” he said.

Polish prime minister Mateusz Morawiecki used the same forum as an opportunity to take issue with “tax havens in Europe which abuse their power, or abuse their taxation systems to the detriment of other countries”, which, he said, should stop.

“This is not helping the European union to build trust,” Mr Morawiecki said, noting that he is a strong supporter of a digital tax for technology giants operating across the European Union, to which Ireland is opposed.

Other topics of discussion at the panel discussion with Mr Varadkar’s Dutch and Polish counterparts included immigration and global leadership, while Brexit was studiously avoided. The UK chancellor of the exchequer Philip Hammond, who was also originally scheduled to speak during the 45-minute session, had earlier pulled out.

The Republic, having long resisted efforts by the European Commission to set up a common consolidated corporate tax base (CCCTB) and financial transactions tax regime, was among a group of countries, including Sweden and Denmark, that effectively blocked a Brussels proposal last year to introduce a digital tax, levied at a rate of 3 per cent on EU-based digital sales of multinational companies.

Last week, the Government rejected the new proposal from the commission, which is seeking to gradually remove national vetoes on tax matters in the EU. Mr Varadkar said that Ireland’s objection to the digital tax plan is due to the fact that it is a sales tax, rather than one that charges a levy on where profits are made.

Mr Varadkar also told the Davos audience that Europe needs to become more of a leading and coherent voice on international matters at a time when America “has decided to move away from its former role in world leadership, regrettably, at least for now”. With China also becoming increasingly powerful, “Europe really needs to be able to have a common foreign policy, in particular,” he said.

“Whether we like it or not, Europe’s influence is diminishing in the world,” Mr Varadkar said, adding that the population and economic shifts currently underway are to the East and southern hemisphere.

“If we’ve any chance of preserving our values and our ways of life, we need to stick together.”

1 Should my mam wait for house prices to drop before buying?
2 Parts of Brown Thomas and Arnotts to reopen next week
3 Brother is dragging his heels as executor of uncle’s will - is there anything I can do?
4 Apple tax case: Four individual lawyers paid over €500,000 each
5 US takes aim at digital services taxes in EU
6 Irish whiskey sales near milestone of 12m cases a year
7 Man charged with stealing €31,000 from company account
8 Covid-19 mortgage breaks: What’s the catch?
9 Pet product firm’s directors restricted from involvement in companies
10 Irish comic book artist designs face mask coverings for young flyers
Real news has value SUBSCRIBE