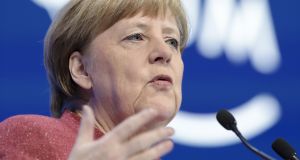 German chancellor Angela Merkel delivered a robust defence of the post-war multilateral order in Davos on Wednesday, lauding compromise as a virtue in international relations in a veiled criticism of US P resident Donald Trump.

In an address to global political and business leaders in Davos, Mrs Merkel urged western powers to think beyond their narrow national interests and to reform global institutions with a view to achieving “win-win” outcomes.

Germany, Europe’s largest economy, is heavily dependent on international trade and as such has a big interest in preserving the integrity of global multilateral systems that are now confronted by Mr Trump’s ‘America First’ approach.

“[ The western world]has to act against the fragmentation of the international architecture, and be ready to reform the existing institutions,” Mr Merkel said in her address to the World Economic Forum .

“I think we should understand our national interest in a way that we think about the interests of others and from that create win-win situations that are the precondition for multilateralism,” she added.

Global organisations such as the International Monetary Fund and the World Bank must be reformed to restore confidence in the global financial system, Mrs Merkel said.

“For a long time emerging countries like China and India influenced the world economy in a very strong way and when an existing system takes too long to react the consequences are that others [countries] make themselves noticeable through new institutions,” she added.

Earlier in the day Japanese prime minister Shinzo Abe said he hopes there is a transitional period for Britain’s exit from the European Union as many Japanese companies have made investment inroads into the country.

Abe also reiterated his resolve to raise Japan’s consumption tax rate to 10 percent from 8 per cent in October as scheduled. “We are in an environment where we are able to raise consumption tax,” – Reuters