Davos 2019: ‘Not in anyone’s interest’ to have Brexit with new rules, Former Bundesbank president says 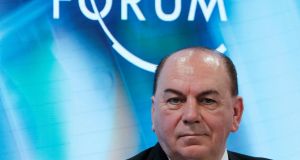 The Institute of International Finance’s (IIF) chairman, Axel Weber, has warned that a no-deal Brexit must be avoided, even it means stopping the clock on the current schedule for the UK to leave the EU at the end of March.

“I think, ultimately, it is not in anyone’s interest in having Brexit without new rules…even if that requires more time to negotiate,” Mr Weber, who is also chairman of Swiss banking giant UBS and a former president of German’s central bank, the Bundesbank, said during a panel discussion on the opening day of the annual World Economic Forum in Davos.

Mr Weber said that “creating domestic acceptance” of a withdrawal deal is as important as the agreement itself and that the EU “should give more time” to the UK.

The International Monetary Fund warned on Monday that the prospect of a disorderly Brexit counts among the main risks facing the global economy, which is already slowing down.

Meanwhile, Mr Weber said that the ambition of central banks to return interest rates to a “normalised” level in the current economic cycle, following a decade of ultra-cheap money, is a case of “mission aborted” as growth eases.

Mr Weber said that he expects the US Federal Reserve, which has raised its rates nine times since December 2015, may only hike rates once or twice again this year, while the European Central Bank, which has indicated that it will hold its rates at zero until after the summer, is likely to postpone pushing through an increase.

ECB president Mario Draghi told the European Parliament last week that “a significant amount of monetary policy stimulus is still needed to support the further build-up of domestic price pressures and headline inflation developments over the medium term”. While the ECB ended its €2.6 trillion bond-buying programme, known as quantitative easing (QE), at the end of last year, it will continue to reinvest cash received from maturing bonds for what it calls “an extended period” of time.

“In general, monetary policy normalisation will not be done in this cycle,” Mr Weber said, adding that returning interest rates to a “normalised” level will be “an issue for the next cycle”.