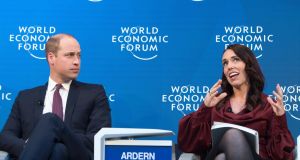 Appearing on a World Economic Forum panel on Wednesday on mental health, Britain’s Duke of Cambridge, perhaps better known as Prince William, laid a lot at the door of the war generation.

“British people are particularly bad at expressing their emotions,” the prince told a packed hall in Davos, adding that he believed this could be traced back to the war, when people bottled up their feelings and the “stiff upper lip” was passed on to the next generation.

Mental health is 'a lot easier to talk about' now, the prince said, as he recalled for the Davos audience how he struggled personally with his work in the air ambulance service

The prince said that when he, his wife, Catherine, Duchess of Cambridge, and his brother, Prince Harry, set up their mental health campaign, Heads Together, “not one celebrity wanted to join us”, such was the stigma attached to the issue.

Mental health is “a lot easier to talk about” now, the prince said, as he recalled for the Davos audience how he struggled personally with his work in the air ambulance service, dealing with “a lot of trauma on a day-in, day-out basis”.

Joining the prince in the discussion, New Zealand prime minister Jacinda Ardern said she has lost friends to suicide and that her government is prioritising mental health.

“One of the sad facts for New Zealand is that everyone knows someone who has taken their own life,” she said. “We’re a small country, of less than five million people, but last year more than 600 people committed suicide.”

Ardern, on something of a mini-European tour this week, has become one of the most predominant faces at this year’s Davos, popping up on three panels over the past two days, including discussions on climate change and the need to broaden measures of economic success beyond GDP figures.

Even though Merkel relinquished the leadership of her ruling Christian Democratic Union party before Christmas and plans to bow out as chancellor in 2021, the global elite has relied on her to be a leading voice for the West since many other global leaders have stayed away from this year’s gathering.

Highlighting a “number of challenges” facing “a rather gloomy” world today, from climate change to cybersecurity breaches and slowing growth, Merkel called on fellow leaders to compromise on important matters.

“There is a new approach that we see in the world today, an approach that harbours doubts as to the validity of the international system. They say, ‘Shouldn’t we look after our own interest first?’” she said. “I have my grave doubts that this is the right way to go about it.”

Merkel added: “We will only master the challenges of our time if we hold together and work with others across boundaries and borders.”

Fresh from having signed a new friendship treaty with France in the German city of Aachen on Tuesday – at which she courted controversy by saying the UK’s relationship with Europe “was always very patchy” – Merkel told her Davos followers that she is working for a “well-ordered” Brexit and a good future partnership between both sides.

What’s certain is that she’s far from alone in her efforts.