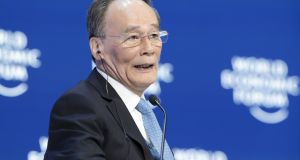 Wang Qishan, China’s vice-president, insisted China’s growth rate in 2018 of 6.6 per cent was still “a pretty significant number, not low at all”. Photograph: Jason Alden/Bloomberg

China’s top economic official has discounted mounting fears that decades of breathtaking expansion were beginning to falter in the face of a US trade war, insisting “sustainable growth” in his country would be maintained.

Wang Qishan, China’s vice-president, acknowledged there were risks facing Beijing as well as other major economies, including “unilateralism, protection and populism”, an apparent reference to US president Donald Trump’s trade policies.

But he insisted China’s growth rate in 2018 of 6.6 per cent, which was slowing to its lowest level in almost three decades as the year ended, was still “a pretty significant number, not low at all”. He added that while “speed does matter”, it was the “quality and efficiency” of growth that was more important.

“There will be a lot of uncertainties in 2019, but one certainty is that China’s growth will continue and be sustainable,” Mr Wang told the World Economic Forum in Davos, indicating that his government would pull out all the stops to maintain the many years of growth since the nation opened itself up to commerce in the 1980s.

Mr Wang’s comments came as new evidence emerged that the slowdown in China, which last week disclosed that its economy grew at an annual rate of just 6.4 per cent in the fourth quarter, was continuing to reverberate internationally.

Japan on Wednesday reported that its exports shrank at the quickest pace in two years last month as shipments to China tumbled. The year-on-year drop of 3.8 per cent after two months of growth was twice as bad as forecast by economists surveyed by Reuters and marked the sharpest fall since October 2016, according to preliminary data from Japan’s finance ministry.

Other countries in the region whose exports shrank in December include South Korea, Indonesia, Thailand and Singapore.

The drop in Japanese exports to China was driven by falls in chipmaking machinery and communications equipment in the wake of the US-China trade dispute and Washington’s complaints to Beijing over technology transfers. After its meeting this month, the Bank of Japan also revised down its forecasts for inflation on a weakening global outlook for prices.

Shinzo Abe, Japanese prime minister, in Davos said: “My strong hope is that the US and China will have a rational conclusion of their engagement at the end.

“For Japan, China has been the largest trading partner, and the current situation is that we do recognise that there are issues that we would like to see China addressing and resolving.”

Mr Abe added: “The key is not to try to resolve these issues through bilateral trade measures, but rather utilising the international rules.” – Copyright The Financial Times Limited 2019

1 ‘I’m so lucky to be in the Caribbean – a million miles from Derry Girls’
2 Michael Smurfit: ‘I asked Trump to invite me to the White House for my 80th birthday’
3 Tobacco makers still trying to make a mint from Irish menthol market
4 Ryanair expects air fares to fall when flights take off again
5 ‘The recovery needs to be a full-scale economic renewal’
6 Small businesses are cannon fodder in zealous anti-virus experiment
7 Ireland stands to benefit in a big way from investing in public transport
8 Brexit, coronavirus and bark beetle pose challenges for Coillte
9 Minister calls on EU to act against tobacco firms ‘undermining’ menthol ban in Ireland
10 ‘Never mind GDP; the most fundamental job of any leader is to keep his people alive’
Real news has value SUBSCRIBE