Davos 2019: new premier promises to press ahead with reforms 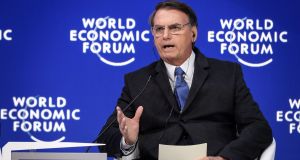 “The left will not prevail in this region, which is good, I think, not only for South America, but also for the world,” said Mr Bolsonaro, a former army captain who took office on January 1st, after rising to power on a platform of anti-corruption and pledges of market-friendly reforms.

Billed as a star Davos speaker after world leaders such as US president Donald Trump, British prime minister Theresa May and French president Emmanuel Macron stayed away from the conference to attend to their respective domestic problems, Mr Bolsonaro promised in a brief, six-minute speech to press ahead with social security and tax reforms as well as the privatisation of state assets of the region’s largest economy.

Using cue cards as he answered questions from WEF fonder and chairman Klaus Schwab, the Brazilian president promised to open the country to investment while harmonising “environmental preservation with much-needed economic development”.

Mr Bolsonaro’s debut appearance on the world stage took place against the backdrop of media reports that Brazilian authorities are looking into suspicious bank transactions involving the president’s son, Flavio Bolsonaro, who denies any wrongdoing.