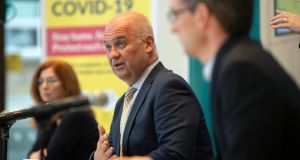 Given the scale of economic carnage and human misery coming over the hill, every arm of the State should be on a war footing to save small businesses. Instead, those in tourism and retail are left exposed on the front line as cannon fodder, as Ireland pursues an economically-reckless scientific experiment to throttle a virus that other European countries are learning to keep at bay.

Our unique trajectory on border quarantines, the stubborn plodding when unwinding lockdown, and the baffling insistence that consumer-facing businesses implement twice the social distancing recommended by the World Health Organisation has marked the Republic out.

Why must Ireland be the nation still sucking its thumb in fear while the rest of Europe tries to walk carefully again? It would make sense if we had been hit harder or faced greater threats than the others. But that’s not the case.

It is hard to reconcile this with the declaration to an Oireachtas committee last week of Tony Holohan, the chief medical officer, who said the virus has been “extinguished from the community in general”.

He said the Republic no longer has “sustained widespread community transmission”. In other words, the virus isn’t swirling much around the general public anymore. Instead, it is mainly confined to nursing homes, hospitals and hotspots such as meat factories, and the close contacts of people linked to them.

The obedient public was originally told it must endure temporary lockdown to flatten the curve, but now it is being told to flatten small retail and tourism too with an anvil of caution. That is not how lockdown was sold.

Originally, people were not warned that borders, with the exception of the one across the island to the UK’s jurisdiction, would be effectively sealed for the foreseeable future via mandatory 14-day quarantines that kill demand.

Although he was slapped down, Michael O’Leary of Ryanair was correct this week to point out some inconsistency. It is a conscious decision to sacrifice the travel and hospitality industries. It could be justified for travel from complacent countries like the US. But why impose this on sensible Europe?

When the Republic was luxuriating in exaggerated self-praise in March for being an early mover on restrictions, people were not told they would be the last in Europe to ease up. It feels akin to a deception. It will also sacrifice retailers.

It is profoundly depressing to watch politicians still slavishly following every last scrap of draconian advice from well-meaning scientists and doctors.

Let us be clear: nobody is acting in bad faith here. Not the medics or Government, but nor are those criticising them. The nation will stay indebted to the National Public Health Emergency Team for helping to save so many lives in the acute phase of the virus. But some of their ideas will kill many livelihoods dependent upon small businesses in the next phase.

Morally and practically, this cannot be brushed aside as an irrelevance.

The virus may be lethal for older people, but the medicine we are being asked to chug now is no good for the young. It is mostly the young, alongside immigrants and the modestly-skilled, who work in the retail, hospitality and tourism sectors that will be devastated by our fat dose of over-caution.

There will be no work for the young unless we get a grip and tackle this draining of our national self-confidence. For that is what has happened here.

If the medics’ iron-clad influence over national decision-making is not counter-balanced from here on in by pragmatic and assertive economic voices, we risk a deep, self-inflicted gash in society and the economy.

As the medical crisis gets usurped in time by its terrible economic twin, having a GP as Taoiseach could shift from being a clear advantage to a drawback.

Despite his background as a man of medicine, Leo Varadkar built his political profile as a defender of liberal economics. So he must realise that Ireland, one of the most open economies in the world, can’t possibly function properly in the European single market if we set ourselves up as a walled garden away from it.

One of the most irritating aspects of this pivot into a deeply conservative anti-virus strategy, and for which no proper public debate was held, is that those leading it keep repeating the mantra that it will be good for business. Almost nobody in business is saying this – quite the opposite. But, like doctors, the Government has decided it knows best.

According to a Bloomberg report on Wednesday of a conference call between bond investors and Minister for Finance Paschal Donohoe, he argued that the desperately slow unwinding would yield a “prize” for business in future: public confidence about health. It will also yield long-term economic scarring, some of which is avoidable.

And the public may never feel fully confident about public health until there is a vaccine, so we should not aim for the unattainable.

We should learn to get on with it like Germany, Spain, Italy, France, the Netherlands and the rest.

The Government is getting comfortable with a welfare mentality in its relationship with the retail and hospitality sectors. Keep them all locked down until the doctors are happy and feed SMEs the methadone of cheap loans and grants.

They do need financial help. But their long-term interests are not best served by welfare, but by untying their hands from behind their backs and allowing them to trade safely now. It will not be 100 per cent safe. Driving a car is not 100 per cent safe but we still see the value in it.

Why not let the economy get on as best it can with the system of speedy testing and contact tracing doing the heavy lifting, along with sensible but stringent social distancing, continued investment in healthcare capacity, and other sensible precautions?

Give over village squares and town centres for safer outside dining for hospitality businesses on these warm summer weekends. Speed up the reopening of retail if it is safe. Don’t effectively seal all-but-one of the Republic’s borders, cutting off the European Union.

The Government would never take the risks with the foreign direct investment sector that it is now taking with SMEs. Not in a million years.