Threatening a business with a bad review is ugly bullying 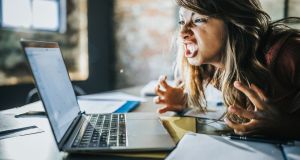 Small businesses are particularly exposed to the impact of bad reviews, and some customers now appear to use such threats to blackmail them. Photograph: Getty Images

The adage in business is that the customer is always right. Anybody whose work requires them to transact with the general public knows the customer is frequently wrong, sometimes rude and a few are occasionally vengeful or spiteful. The northern English are right when they say there is nowt so queer as folk.'

It is not news to say the internet and social media has coarsened human interaction. Perhaps as a counterbalance to the freedoms and efficiencies the internet brought, it has also magnified the worst in us. Some of us say things online that we would never dream of saying to a person’s face.

Small business owners, especially restaurants and others in the hospitality trade, rely on driving custom by maintaining a good public image with the quality of their online reviews. They are particularly exposed to the impact of bad reviews, and some customers now appear to use such threats to blackmail them. Very occasionally, small businesses may even find themselves flooded with one-star online reviews, marshalled by a chief bully. It can be hugely damaging.

Any customer is entitled to review their experiences, especially if it was a bad one and they want to raise their voice in protest. But vengeful weaponisation of negative reviews against small businesses by disgruntled customers, or sometimes even just would-be customers, must be terrifying for owners.

If media is merely a mirror held up to society, what ugliness can be reflected back at us from the glass of social media. Consumer malignancy has been empowered in this cold digital world with its tyranny of bad reviews.

I was particularly struck this week by one small, but highly instructive, example of how distressing it can be for struggling small businesses on the receiving end. It was not one of the hugely damaging, organised mass pile-ons. But in its small way, it starkly illustrated how exposed SME owners must feel.

A couple of times a year, I ramble out to the seaside town of Blackrock in south Dublin with my family. We often wander through the attractively ramshackle Blackrock Market. As a devout disciple of good Indian food, I’ve often noticed the tiny but intriguing-looking 3 Leaves restaurant among the others.

It appears to have only a handful of seats, but 3 Leaves has built up a loyal customer following by serving what is reputedly some of the best Indian food in Ireland. Its owners are a dedicated husband and wife who immigrated from Kerala, Santosh and Millie Thomas, whom I know only by reputation in the trade.

Santosh is a formally-trained, highly accomplished chef, while Millie, who works in the restaurant too, is also a hospice nurse. Earlier this week on International Nurses Day, they cooked food for staff of St Vincent’s Hospital.

The restaurant sector is being cruelly crushed by the the new coronavirus and its twin impact of social distancing and lockdown. Owners are struggling to survive and many conventional restaurants have turned to cooking meals for delivery or collection to generate some cash flow to pay the bills.

To get through the coronavirus era, 3 Leaves has also resorted to cooking a limited number of pre-ordered meals each week for collection. Each Wednesday at 2pm, it opens its time slots for the week: 5pm to 8pm on Thursday to Saturday. It is a popular spot but its already tiny capacity has been hit further by the virus: 3 Leave’s limited slots are normally quickly booked up.

At 2.23pm on Wednesday, its owner posted a distressing exchange with a customer on Twitter. Some entitled soul had angrily emailed the restaurant five times in three minutes after failing to gain one of the coveted collection slots.

Small business owners are under incredible pressure. The anxiety in the restaurateur’s tweet was clear. The author of the tweet did not identify his or her self, but many responded to it addressing her as “Millie”. She responded in a way that appeared to confirm it was her. She said she was “crying” from the stress.

“Please don’t threaten a local business to leave a bad review to secure a booking. Kindly support... during these difficult times. We are a very small business with limited resources,” she wrote.

It continued: “[We are] getting more and more DMs threatening to write bad reviews to secure a booking. I am calling this out.”

The tweet included a screenshot of one customer’s email, with the sender’s name blanked out. In an act of intimidation, the author addressed the chef coldly by his first name: “Santosh – shall I write about the experience here?”

It included a link to Google Reviews, the reputational lifeblood of small eateries. The would-be customer’s threat was not even thinly-veiled: put me to the top of the queue or I will damage your tiny business out of spite.

After the 3 Leaves restaurateur tweeted her distress at being bullied during such a difficult time, a wave of small business owners responded in knowing tones. The independent Gutter Bookshop sympathised by saying its owners “know how this kind of attack can hit home, especially when you are exhausted and working flat out to save your business”.

Kerala Kitchen in Ballsbridge said “we know how it is”. The Village Butcher in Ranelagh said it had received messages from restaurants who had been similarly threatened by customers. Lily Ramirez-Foran of Picado Mexican near the Grand Canal said she had a similar “nightmare last week with two different people... we are out there trying to do our best”.

Bad reviews are perfectly acceptable. The threat of a bad review against an exposed and struggling SME to secure favourable treatment is just ugly bullying.

Complaining about this kind of behaviour can feel like shouting at a cloud. It doesn’t matter what you say: it is going to rain anyway. People will always be unkind to each other online. But they also ought to know the distress it can cause.

1 ‘Saudi Arabia is where the opportunities will happen in future’
2 Ireland property rush risks repeat of crisis
3 Scars from the crash give Irish banks 2.6 billion reasons for Covid caution
4 MSD buys Takeda biologics plant in Dunboyne
5 Nine Goodman companies made largely untaxed profit of €170m
6 Identigen founders make €12m each from sale of company
7 What will the office market look like after the great remote working experiment?
8 Eight places that will pay you to move there
9 State’s biggest landlord records 30% rise in rental income
10 How to . . . move (almost) everything to your new phone
Real news has value SUBSCRIBE