Property prices on track to surpass Celtic Tiger highs by 2020

Price rises outside Dublin to lag capital by a year, new study by Savills predicts 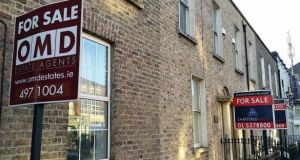 An analysis by Savills shows house prices may return to peak April 2007 prices in Dublin by February 2020.

They said it wouldn’t happen again, but if house prices continue to rise at the current pace, peak prices will return in the Dublin area by February 2020, and across the country by March 2021, new research shows. The rate of growth indicates that efforts by the Central Bank to put manners on the market by capping the amount people can borrow are having only a limited impact, while it also puts further pressure on the Government to curb price growth by getting much-needed supply on to the market.

House prices are currently growing at a rate of about 12 per cent across Dublin and the rest of the country, and now look set to follow the example of rents, which surpassed Celtic Tiger highs earlier this year. An analysis by Savills shows house prices may return to peak April 2007 prices in Dublin by February 2020 – just 2½ years away – if the current rate of growth continues. Outside Dublin the recovery will lag, with prices back to former highs by March 2021.

Latest figures from the Central Statistics Office show that Dublin prices are still 26 per cent below peak, but the gap is closing fast. And even if house prices grow at a more muted pace, they will still eventually catch up with boom-time highs.

John McCartney, economist with Savills and author of the research, is forecasting annual house price growth of 8-12 per cent for 2017, but expects it to slip back to 6-8 per cent in both 2018 and 2019.

“Our expectation factors in the rising base – which naturally drags on the percentage rate of growth over time in a rising market – and the expectation of a gradual catching up of supply,” he says.

Applying and extrapolating these rates would bring house prices back to peak around one year later in each location when compared with the above. So, based on these forecasts, it would be March 2021 before national prices are back to April 2007 levels.

This time around however, house price growth is clearly not being driven by easy access to cheap financing. Data from the Central Bank shows the average loan to value is now about 79 per cent – far from the 100 per cent mortgages of the boom years – while income multiples of 3.5 times salary also exert a limit on the amount people can borrow.

The problem perhaps is the proliferation of cash buyers as investors come back into the market seeking out generous yields. Since the second half of 2011, cash buyers have accounted for as much as 63 per cent of all transactions in the residential property market. This means they are not beholden to the regulator’s macroprudential rules, and thus appear to be having an inflationary impact on house prices.

Supply is at record lows, which is driving price growth, with transactions still far below Celtic Tiger highs. What is puzzling is that house price growth is advancing so fast at a time when earnings have only started to pick up again. This suggests house price growth may plateau, particularly once cash-rich investors start to dry up and if and when supply ramps up.