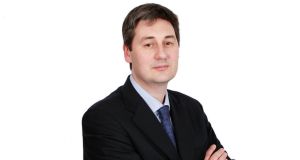 Mark Kennedy, managing partner at mazars, who is calling for more investment in the regions and less focus on debt repayment.

Europe has already moved on from the Brexit debate and the focus now should be on a transition plan for those EU states likely to be worst affected, according to the head of a leading Irish accountancy firm.

And, with the budget looming, Mark Kennedy, managing partner of Mazars, argues that this should include some latitude for Ireland and other countries on rigid rules on debt and state aid.

“When you spend time in Europe, they’ve moved on. They don’t see a problem with the UK going,” he said. “Clearly, they’d rather that the UK didn’t go but the decision has been made.”

He noted that the television debate between Angela Merkel and her SPD opponent Martin Schulz ahead of Thursday’s general election in Germany did not feature even a mention of Brexit.

“I think if you ask anybody [in Europe] they’ say, ‘yeah, we’d love to see a deal with the UK that did something sensible’ but are they prepared to sacrifice a lot for it? No, I don’t think so.”

Mr Kennedy said his view of Brexit had changed and that he now expects a hard Brexit. Financial services firms, which have already put plans in place to contend with such a scenario, will “push the button, I think, in the early part of next year”.

“It’s very hard to reverse that, even if there is a late stage political reconciliation. If you decide to take something from London and put in Frankfurt, Milan or Dublin, you’re not going to unwind that overnight.”

He acknowledges that a hard Brexit will hit certain Irish sectors – notably agribusiness, tourism and even distribution – hard and argues for a looser fiscal framework.

“What the EU should be looking to is a transition plan for member states that are going to be in difficult situations in one sector or another,” he says.

“I think the UK going is probably as big an event for the European Union as East Germany coming back in to West Germany. And the way it was looked at at the time was what was good for making those two countries work well through a difficult transition. I think we should be applying the same sort of logic which brings you to the issue of borrowing and infrastructure and so on.”

Kennedy expects little change on the tax front in the budget, and is strongly against any concession on corporation tax. Politics, not business, he argues, is at the heart of recent report s on the issue, especially in France.

But he is calling for investment to address a growing regional imbalance in the State.

So where is the money going to come from for such a programme? For the Mazars boss, the answer is the EU granting Ireland some wriggle room on debt repayment.

“I think there is a view that the lifting of the burden of debt as a pace is the most important thing and I’m not sure economically if that’s the wisest strategy at the moment,” he says.

“Maybe I’m slightly out of step but I don’t think we need to be as cautious about spending on infrastructure and on development,” he said. “I think the risk for the country is that we underinvest in the regions and don’t make the best use of the capacity we have there” in terms of attracting new jobs and in providing homes outside Dublin’s ever widening commuter belt.

Mazars is looking to the regions itself, and has recently merged with Limerick practice Maguire Caulfield Browne, which it now expects to grow organically. Kennedy says it fills a gap in coverage for the firm which has ambitions to offer services nationwide.

The firm, which now employs 330 people and has core fee income of around €28 million, says recent legislation reforming audit and forcing companies to retender every decade has seen Mazars secure a handful of “very significant mandates, which in that market, is big”. It continues to pitch for more.