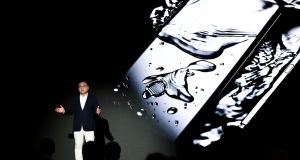 Image of the week: In a galaxy far, far away

Garnering considerably fewer “inches” (as we say in old media) in this part of the world than Apple’s iPhone X this week was Samsung’s launch of the Galaxy Note 8 smartphone, which happened on the same day.

Here, Samsung president DJ Koh speaks during a media event for the device in Seoul, South Korea, with the big news being that Samsung hopes to launch a “foldable” phone next year. He didn’t mean a nostalgic resurrection of the flip phones of old, but rather a device that can completely bend in half like a cosmetics compact. Samsung already makes flexible and curved displays, but has yet to produce a screen that can fold in half. #Goals.

Percentage drop in the value of cryptocurrency bitcoin after JP Morgan Chase chief executive Jamie Dimon described it plainly as a “fraud” and “worse than tulip bulbs”.

Value that bitcoin might or might not reach before it will “eventually blow up”, Dimon said. “Don’t ask me to short it.”

Sum that “investors” in bitcoin, which isn’t backed by any government, should be prepared to get in return for their stake as there are no guarantees.

Getting to know: Craig Federighi

You would need a heart of stone not to feel sorry for Craig Federighi, Apple’s senior vice-president of software engineering, the executive who did the first demo of the iPhone X’s facial recognition technology, Face ID, only to find his face didn’t ring a bell and the phone would not unlock.

“Unlocking it is as easy as looking at it and swiping out and, you know . . . Let’s try that again.” The passcode screen (aka the old security technology) then popped up. “Ho ho ho . . . let’s go to back-up here, and get right in,” said Federighi. It was a brief but critical technical hitch, even managing to cause a glitch in Apple’s share price. Also, Siri was not impressed.

Northern Rock, before it collapsed a decade ago, was a source of pride as well as employment in Newcastle-upon-Tyne, but its crash cost the city more than 2,500 jobs. So which other major companies have headquarters in the city?

1. Bellway: The FTSE 100 residential property developer began life as John T Bell & Sons in Newcastle in 1946 and expanded in the post-war building boom.

2 The Go-Ahead Group: Hmm, now where I have heard that company being mentioned recently? The company that was awarded private contracts for 24 bus routes in Dublin last month hails from the northeast of England and is still headquartered in Newcastle.

3. The Sage Group: The enterprise software company with a presence in Ireland was founded in the city in 1981.

5. Greggs: Best-selling sausage rolls have to come from somewhere.