Planning permission for apartments up just 2.7 per cent year on year in second quarter 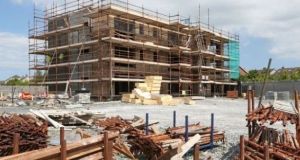 Despite the dearth of supply in new homes, the pipeline of new apartments appears sluggish at best, according to new planning permission figures.

Planning permissions are rocketing, with a 42 per cent increase reported in the year to June 2017. However, it’s unlikely to feed into a significant bump in supply with figures showing that the vast majority of permissions being granted are for houses, not apartments.

Developers argue that apartments are financially too risky and expensive to build, with developers required to fund and build an entire block before they can start selling them off. A a recent study carried out by officials in the Department of Housing found it was not financially viable for builders to construct “affordable apartments” with sales prices of between €240,000 and €320,000.

Moreover the Construction Industry Federation (CIF) recently argued that parking spaces for apartment blocks can cost property developers up to €100,000 each, which makes such developments increasingly unviable.