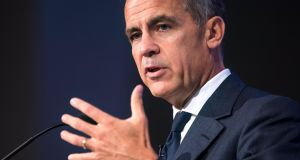 Bank of England governor Mark Carney said Brexit is undermining the UK’s supply capacity, making it harder for the economy to grow without generating inflationary pressures.

In a speech in Washington on Monday, Mr Carney said that was one reason why the central bank may need to increase interest rates in the coming months, echoing the surprise statement issued by UK policymakers last week. That assertion on Thursday prompted investors to price in a rate hike by early next year.

On Brexit, Mr Carney said leaving the European Union would at least temporarily reduce the openness of the economy because any replacement deals with other trade partners would take time to be agreed and to have an impact.

He used a French phrase to sum up this view – “reculer pour mieux sauter” or “stepping back in order to jump better”.

While quitting the EU may have a disinflationary impact because the bloc is such a huge export market for the UK, there’s also an inflationary upside to consider. In addition to the impact of the weaker pound on import costs, there’s the fallout from reduced migration and a smaller labour force, as well as less investment, which cuts the economy’s potential growth.

Mr Carney has also called this a reduced “speed limit” for the economy.

“There remain considerable risks to the UK outlook,” he said, noting how consumers, companies and markets respond to progress in the Brexit process. He also said the economy would underperform the Group-of-Seven average through mid-2018.

There are also global factors that justify tightening soon, according to the governor. In his view, the case is reinforced by the possibility that global equilibrium interest rates may be rising. That means that monetary policy “has to move in order to standstill.”

In his speech, Mr Carney also discussed the impact of globalisation, demographics and technology on the world economy and monetary policy. – (Bloomberg)