Pound spikes after hawkish comments from Bank of England 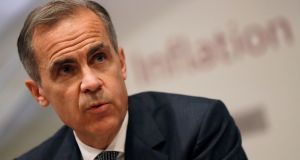 Bank of England governor Mark Carney. The UK central bank’s monetary policy committee has ruled 7 to 2 in favour of maintaining its key interest rate at 0.25 per cent. Photograph: PA

The Bank of England ramped up its hawkish rhetoric on Thursday, warning that an increase in interest rates could happen within months if the economy performs as officials expect.

The pound spiked after the comments and investors shifted to fully price in a rate rise by early 2018.

The UK’s central bank kept its key interest rate on hold as expected, although two members of its monetary policy committee voted in favour of a 0.25 percentage point rise.

Committee members Ian McCafferty and Michael Saunders maintained their push for an increase, which would reverse the rate cut put in place after the Brexit vote in 2016.

A majority of seven members, led by governor Mark Carney, voted for no change.

Sterling rose to as high as $1.3358, adding a cent and a half to touch its strongest point in more than a year against to dollar. It also rose to 89.11 pence per euro after the decision.

The Bank of England noted in its comments that the sterling exchange rate has been volatile and the price of oil has increased, with both headline and core price inflation higher than expected in August.

The majority of the committee judged that, if the economy develops as predicted, “some withdrawal of monetary stimulus was likely to be appropriate over the coming months in order to return inflation sustainably to target”, minutes of the meeting showed.

While the vote to leave the European Union has cast a shadow over the economic outlook, the resulting drop in the pound has pushed up inflation. The bank now sees the rate of price gains exceeding 3 per cent in October and remaining above its 2 per cent target for years.

The bank described circumstances since the referendum on EU membership, and the accompanying depreciation of sterling, as “exceptional” and warned that monetary policy could not prevent a “necessary real adjustment” as the UK moves towards new international trading arrangements or “weaker real income growth”.

The committee reiterated a warning from its August meeting that monetary policy could need to be tightened “by a somewhat greater extent” than market rates imply.

It also said that any increases would be “at a gradual pace and to a limited extent.”

Bank of England staff see overall economic growth on track for 0.3 per cent in the third quarter. Still, tepid wage growth is darkening the outlook for consumer spending as uncertainty about the nation’s future after Brexit prompts companies to keep a lid on investment and pay.

There remain “considerable risks” to the outlook, the minutes said.