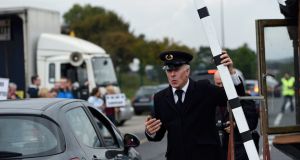 Anti-Brexit campaigners, Borders Against Brexit, set up a mock customs search during a protest against Britain’s vote to leave the European Union, at the border town of Carrickcarnon in October 2016. Photograph: Reuters/Clodagh Kilcoyne

Signs of a significant pick-up in Brexit-related cross-Border shopping has emerged in the national accounts.

A €300 million fall-off in excise duty receipts in the second quarter of 2017 was attributed to increased purchases of alcohol, cigarettes and fuel across the Border.

“While it’s a bit early to say categorically what the cause of this is, it’s undoubtedly related to the weakness of sterling and a pick-up in cross-Border activity,” Michael Connolly of the Central Statistics Office (CSO) said.

While there has been anecdotal evidence of an increase in cross-Border shopping in recent months, this is the first hard data confirming that consumers here are exploiting the currency differential by shopping in the North.

Since last year’s Brexit referendum in the UK, sterling has lost more than 15 per cent of its value against the euro. It was trading at 88p on Friday but has been as high as 92p.

Shoppers here flocked across the Border in 2009 when the euro neared parity with sterling, triggering a major outflow of business in the Republic’s retail sector here.

The CSO’s latest quarterly national accounts confirmed the Irish economy continues to grow strongly, accelerating by 1.4 per cent in the second quarter of 2017, compared with a 2.6 per cent contraction in the previous quarter.

Despite the volatility from quarter to quarter, the figures show the Irish economy is growing at a healthy 5.8 per cent in annual terms.

Apart from small contractions in the construction and real estate sectors, all sectors of the economy experienced growth during the quarter.

Output in the construction sector, which is responsible for much of the current job growth, was, however, significantly up on last year.

The figures also reveal another Brexit-related trend with consumer spending, a key driver of domestic economic activity, falling by 1.1 per cent in the quarter.

This was attributed to an ongoing decline in new car purchases and an increase in the purchase of used cars from the UK, a shift in consumer behaviour, which is also being driven by the current weakness in sterling.

Investment, the other key element of domestic demand, jumped 39.9 per cent in the quarter driven by the import of intellectual property (IP) products to Ireland, which has been feature of the accounts in recent quarters and is linked to the OECD’s clampdown on multinational tax avoidance.

The balance of payments current account, which reflects Ireland’s economic flows with the rest of the word, recorded a deficit of €872 million, an improvement on the €1.65 billion deficit recorded in the second quarter last year.

“Today’s data provides clear evidence of continued momentum in the economy this year with annual GDP growth of 5.8 per cent recorded in the second quarter,” Minister for Finance Paschal Donohoe said.

“Importantly the growth in the economy is broadly balanced with positive underlying contributions from both the domestic and external sectors. The strength of the domestic economy is also reflected in strong employment growth as well as tax receipts to end-August which increased by almost 5 per cent compared to the same period last year,” he said.