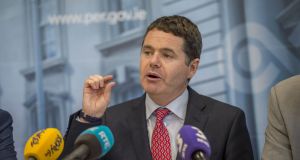 Minister for Finance Paschal Donohoe said Ireland is opposed to what it sees as proposals which undermine its corporate tax system. Photograph: Brenda Fitzsimons

EU finance ministers have agreed to step up technical work on harmonising the taxation of the giant digital companies with a view to debating “possible solutions” at their December meeting.

The ministerial consensus was a significant setback for Ireland. Minister for Finance Paschal Donohoe says Ireland is opposed to what it sees as proposals which undermine our corporate tax system and to suggested changes in voting rules that would circumvent national vetos on taxation issues.

There is little likelihood either set of proposals before ministers will achieve unanimity in December, but the EU Commission and the Estonian presidency said they would be prepared if necessary to advance on the basis of “enhanced co-operation”.

Enhanced co-operation allows groups of willing EU states to advance with projects themselves, while others abstain.

In the area of corporate tax, it would allow countries like Ireland, however, to maintain a competitive advantage by opting out. That would certainly cause friction with fellow member states.

Mr Donohoe, speaking at the conclusion of the informal Ecofin meeting in Tallinn on Saturday, said there were very considerable difficulties involved in the proposals before the meeting, both to the long-term solution being proposed by the Estonian EU presidency, and short-term measures proposed by the French and formally backed by 10 member states.

The latter, an “equalisation tax”, would see taxation of digital business turnover rather than profits, a measure that would strongly benefit larger states.

The challenge of taxation of the digital economy, which he accepted was necessary, “is better managed in a global environment”.

Ireland welcomed the work on the issue by the Organisation for Economic Co-operation and Development, which is due to report next spring.

The Minister said he had “pointed to the very strong record of Ireland in dealing with the improvement of our corporate tax code while retaining and strengthening our competitiveness”.

He highlighted in particular the progress made in dealing with stateless companies and in the mandatory exchange of information between taxing authorities.

Ireland is supported by Malta, Cyprus, and the UK.

Toomas Tõniste, Estonia’s minister for finance, insisted there had been unanimity at the meeting over the urgent need to address the challenges of the new digital economy and that the two approaches were not contradictory.

“For us, it is important to agree on new international tax rules that also take into account the business models of the digital economy.

“This would guarantee the equal taxation of all companies regardless of their location or place of activity. I hope that today’s discussion helped us get a step closer to a suitable solution.”

Although he acknowledged the challenge of unanimity in the months ahead, he said he preferred a solution involving the 28 member states and not 28 different tax bases.

EU Commission vice-president for the euro and social dialogue, Valdis Dombrovskis, said the commission welcomed the Estonian initiative: “Where there’s a will, there’s a way”.

Estonia is suggesting that, in reaching common agreement on rules for taxing companies, the requirement that companies have to be physically present in a country or own assets there needs to be abandoned in favour of the concept of a virtual permanent establishment.

The commission will set out its own view of the possible legal options in the coming days, before a summit of EU leaders on September 29th dedicated to digital issues.

One way of approaching the issue might be to amend its proposals, also anathema to Ireland, on a common consolidated corporate tax base. They are currently wending their way through the system.