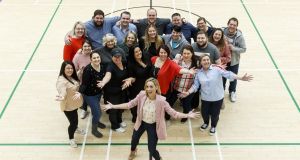 Presenter Kathryn Thomas with aspiring leaders at an Operation Transformation assessment day in Sportslink, Santry, ahead of the 13th series, which launched in January 2020. Photograph: Andres Poveda

New accounts lodged at the Companies Office by Vision Independent Productions Ltd show that the company recorded profits of €210,661 for the 12 months to the end of September last year, after enjoying profits of €281,749 in the prior year.

By the end of September, the company’s accumulated profits had climbed to €921,436 while the company’s cash funds increased to €1.08 million.

Director of Vision Independent Productions Phillip Kampff stated: “2019 was a very strong year for TV. We launched two new formats and our existing shows held or grew their share.”

Operation Transformation, fronted by Kathryn Thomas, is “an important show for us”, he said.

Operation Transformation returned for a 13th series last January, with the season averaging at 441,000 or 34.1 per cent audience share. An RTÉ spokeswoman said the weight loss series had “gone from strength to strength” and was “very popular with our viewers”.

In 2015, the company made its first move into digital through twinstrangers.com, a website that helps people find their doppelganger from anywhere in the world. The move continues to pay dividends for the company.

“We also had a strong year with twinstrangers.com, with 7 million people now on the platform,” said Mr Kampff.

On the company’s other TV shows, he said garden design competition series Super Garden enjoyed a big increase in ratings last year and “is going to Poland”.

On the business impact of Covid-19, Mr Kampff stated: “It’s a new normal. We have adapted to working remotely, investing in improved online capacity so we can work at speed and safely.”