John FitzGerald: Expansion of help-to-buy and bike-to-work schemes are poor uses of funds 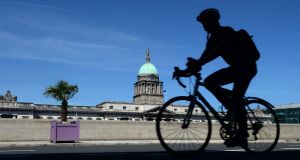 A much more effective way of supporting cycling than financing the cycle-to-work scheme would be to spend the money on bike parks at commuter stations. Photograph: Dara Mac Dónaill

The July stimulus package, announced last week, was along expected lines. It was clear that some of the temporary support schemes, introduced so rapidly as the crisis began, would either need to be continued or amended to deal with the continuing nature of the Covid crisis.

The income support for households has been extended into next year, and it has also been tailored to make it more consistent with a recovering labour market. The generosity of the schemes meant that it would have been exceptionally expensive if continued indefinitely.

The cost of all the emergency measures introduced this year, both in the spring and this week, will come to about €20 billion, or 10 per cent of national income. While the scale of this intervention is broadly similar to that being undertaken in other EU economies, this is by far the largest such injection of public funds ever undertaken in Ireland.

Under other circumstances, such a large stimulus could be expected to raise output by up to 10 per cent. However, on this occasion it will have a much lower impact, so that a drop of about 5 to 10 per cent in output for the year is expected. This reflects the exceptional circumstances of the current crisis.

Households have been heavily supported by Government transfers but, even after the lockdown has eased, they are not able to spend their money on some services such as pubs and are slow to spend in other areas. Thus, people are saving at an abnormally high rate. Under these circumstances, any further transfers to households would tend to increase savings rather than increase spending and raise economic growth.

As well as limiting the positive impact on growth, the exceptional propensity to save means that the Government does not get back its normal share of any stimulus in augmented tax revenue.

In the July statement, the Government expects a revenue boost of under €4 billion from a total stimulus of about €24 billion. Under normal circumstances, with a government stimulus fully spent by recipients, the revenue bounce would be about €5 billion higher, leading to a €25 billion deficit rather than the €30 billion deficit that is forecast.

It is when the economy returns to more normal behaviour, hopefully by 2022, and households begin to spend their savings, that the economy will experience a delayed stimulus and the Government will see a delayed temporary revenue boost.

Key measures in the July “stimulus” are designed to help business. The rates relief and tax warehousing will help cushion the worst effects of the crisis on vulnerable sectors. While it would have been desirable to have targeted these measures at businesses experiencing exceptional difficulties, this would probably have been administratively difficult.

However, there are elements of the July package that look to be of questionable value.

The reduction in the top VAT rate will be of most benefit to businesses whose sales are doing well. Companies that are forced to cocoon will receive no benefit because they have no sales. Also, insofar as the cut in the tax is passed on as lower prices, individuals are likely to add to their savings rather than expand the economy.

In a situation where there is a serious shortage of housing, the help-to-buy scheme already made no sense. It increases prices rather than targeting the supply constraints. Expanding an already redundant scheme is a waste of money, unless you hope to benefit from higher house prices.

Finally, while the expenditure is minuscule, expanding the cycle-to-work scheme to cover bikes costing €1,250 seems a poor use of public funds. As a cyclist for over 60 years, I know that suitable bikes for commuting come at a fraction of that price. This scheme will be of significant benefit to bike thieves, providing them with a larger pool of expensive targets, where gardaí already see industrial-scale theft of high-end bikes.

A much more effective way of supporting cycling would be to spend the money on bike parks at commuter stations. If you look at stations such as Ghent in Belgium, Utrecht in the Netherlands, or Lund in Sweden, you will see huge bike parks with hundreds of cheap works used by commuters.

The October budget will be a much more difficult task for the Government as it will be the first time that the State has to face up to the task of paying for the huge fiscal supports. Expanding fiscal support is the easy bit. Charting a course back to fiscal balance will be a tough challenge.