Mortgage drawdowns slumped in lockdown but approvals up last month 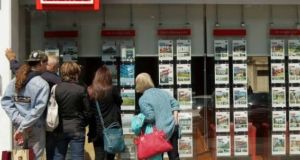 First-time buyer drawdown volumes fell by 34.8 per cent to 3,285 in the second quarter.

The number of mortgages drawn down during the height of the lockdown of the economy fell by just more than one-third, new figures show.

Overall, there were 6,622 drawdowns between April and June, as against 10,157 for the same period a year earlier. Drawdowns were also sharply down on the preceding quarter, when 8,728 drawdowns occurred.

The value of drawdowns totalled a combined €1.46 billion, some 35 per cent lower than the €2.25 billion drawn down in the second quarter of 2019.

Drawdowns for residential house purchases accounted for the majority of all drawdowns at 5,035, but this was down 37 per cent year on year in terms of volume, and by 38.1 per cent in value terms.

Drawdowns for residential investment letting was 48.8 per cent lower and re-mortgage/switching volumes down 22.7 per cent.

“This latest set of figures shows that mortgage drawdowns have held up relatively well in the second quarter of this year despite the overall downward trend and scale of disruption to the economy,” said Brian Hayes, chief executive of Banking and Payments Federation Ireland (BPFI), which compiled the figures.

“In the current volatile environment, we do not expect the market to follow the normal seasonal patterns so the rest of the year will be difficult to predict. However, it is likely we may see a bigger Covid-19 impact in our next set of quarterly drawdown figures due to the time lag between mortgage applications, approvals and drawdowns,” he added.

Separate figures show 2,263 mortgages were approved last month, down 49.5 per cent year-on-year compared to the 4,478 approvals granted for June 2019. However, activity was up 20 per cent versus the previous month.

The value of mortgages approved was down 48 per cent to €536 million as against €1.03 billion a year earlier.

Some 1,688 purchase approvals were granted, down 54.3 per cent, while first-time buyer volumes fell by a similar percentage to 1,059.

Mr Hayes said that while the increase in approvals indicated a level of resilience in the market, suggestions of a recovery “need to be treated with caution.”

“Overall, our message is that lenders are continuing to approve new mortgage applications and consumers should actively proceed with mortgage applications where their incomes and employment circumstances have not been impacted by the current pandemic and where they meet the normal lending criteria,” he said.