Sales grew 38.4% in June compared to May as lockdown restrictions are lifted 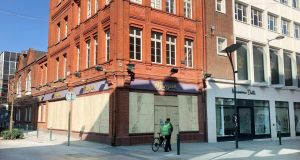 An empty Grafton Street in Dublin at one point during the lockdown. Photograph: Bryan O’Brien

Sales in the retail sector were 3.5 per cent higher in June than in the same month last year as shoppers moved to spend cash that had been saved in the lockdown period, data from the Central Statistics Office (CSO) shows.

The volume of retail sales jumped 38.4 per cent in the month compared to May on a seasonally adjusted basis. That followed a 32.5 per cent rise in May. On an annual basis, volumes were 3.5 per cent higher.

Economist Alan McQuaid said the trend has been observed in other countries, but the question is whether this is sustainable.

“A lot of people won’t go out shopping until they’re fully happy it’s safe out there,. You’d want to see a few months of this, but people had nothing else to do with their money and they just went out and bought.”

However, he added: “I wouldn’t be sticking my neck out to say this is sustainable and trying to downplay the enormity of the situation and the difficulty the retailers are in.”

As the Government relaxed lockdown restrictions the figures also indicate that many shoppers took their business offline. The proportion of total retail sales online fell to 6.8 per cent in June, down from an online share of 13.2 per cent in May.

Mr McQuaid cautioned that this figure only includes businesses that also have a physical presence in the Republic, so a lot of online business from British and US multinationals without physical retail outlets here is not caught by this data.

On June 8th all remaining retail sectors were permitted to open their doors to consumers. Among the businesses that benefitted were those in the furniture and lighting sector, where the volume of sales rose almost fourfold; clothing, footwear and textiles, where volumes increased 284 per cent; and books, newspapers and stationary, where volumes were up by 252 per cent on the previous month.

While retail sales in June were 3.1 per cent higher than in February, before the crisis began, not every sector has recovered.

Sales volume in bars remains down by 80 per cent, while department stores have seen the volume of their sales fall 17.3 per cent. A broadly similar picture can be seen compared to June 2019.

In value terms, retail sales increased 38 per cent in June compared to May and were flat on the year.