Investors in Irish bonds would prefer to see Government taking every opportunity to pay down debt, Conor O’Kelly says 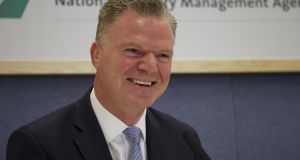 NTMA chief executive Conor O’Kelly: “This late in the investment cycle, there is a higher degree of risk that there could be a material fall in the value of those [bank] shares than there has been in previous years.” Photograph: Sara Freund

The National Treasury Management Agency (NTMA) chief executive Conor O’Kelly has given his clearest warning yet for the Government to get on with the sale of bank stakes or risk a “material fall” as dark clouds appear on the horizon for equity markets.

Speaking at the launch of the NTMA’s annual report on Monday, Mr O’Kelly noted that the US market, measured by the S&P 500, is just two-months off matching its longest bull run – that ended with the dotcom crash in 2000. As such, risks associated with the State’s continued ownership of bank stocks is increasing, he said.

“This late in the investment cycle, there is a higher degree of risk that there could be a material fall in the value of those shares than there has been in previous years,” Mr O’Kelly said, adding that, while it’s up to the Government to decide when to sell bank shares, the NTMA is pushing its view “strongly”.

The State continues to hold a 14 per cent stake in Bank of Ireland, 71 per cent of AIB, and 75 per cent of Permanent TSB. The three positions currently have a combined market value of €10.9 billion.

The minister said that it would take “a number of years” to exit bank investments in a measured way that will “optimise value for our citizens”.

While the Government is targeting net borrowing of 0.1 per cent of gross domestic product (GDP) next year amid a planned €3.4 billion budgetary package, Mr O’Kelly said bond investors would prefer to see Ireland aiming for a budget surplus and taking every opportunity to pay down debt.

He noted that Ireland’s €200 billion-plus public debt stands at 264 per cent of exchequer revenues , the fourth highest in the euro zone, behind Greece, Portugal and Italy. While Ireland has managed to differentiate itself from the three so-called peripheral bond market borrowers to regain a “semi-core” status, he warned that investors can change their minds “very quickly”.

The wider bond markets will have to grapple with a winding down of the European Central Bank’s €2.6 trillion bond-buying stimulus programme and the prospect late next year of interest rate increases. Ireland is more vulnerable than most, given its high debt levels and fact that 90 per cent of the Government’s debt is held by overseas investors, the NTMA CEO said.

“The market can re-rate you very quickly and that can be very expensive and very material when you are as indebted a country as Ireland continues to be,” Mr O’Kelly said.

Poland became the first country in 2016 to issue green bonds to finance climate and environmental investments, with a number of countries, such as France, Indonesia and Belgium having since followed suite as governments globally seek to live up to the Paris climate agreement and investor demand grows for socially-responsible investment opportunities.