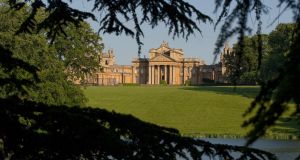 Blenheim Palace could be the venue for the dinner.

About 150 UK business leaders have been invited to an undisclosed location to dine with Donald Trump when he makes his first visit to Britain as US president next week.

The black-tie dinner on Thursday night will be hosted by prime minister Theresa May and is one of the key moments of a three-day “working visit” that will also include talks with Ms May at Chequers, her country residence, a meeting with Queen Elizabeth at Windsor and a round of golf in Scotland.

Such are the security concerns around the visit that the venue remains a secret, with the guests so far being told that it will be between one and two hours’ travel from London. “It’s a bit like those 1980s warehouse raves where no one knows until just before,” said one lobbyist with a client attending the dinner.

A number of people suggested that the dinner will be held at Blenheim Palace, the former family home of Winston Churchill, who is admired by Mr Trump. The palace, its park and gardens have been closed to the public next Wednesday and Thursday.

The president is expected to travel to and from the venue by helicopter, before staying overnight at the US embassy.

The visit comes between a Nato meeting and a summit with Vladimir Putin, the Russian president, and is expected to generate controversy, especially given the recent separation of child migrants from their parents.

With a protest of up to 50,000 people being planned in the capital, British officials are keen to minimise the time that Mr Trump spends in London.

The UK treasury has pledged up to £5 million to cover the policing costs of Mr Trump’s visit to Scotland, including for mass protests in Glasgow and Edinburgh, with 5,000 officers on standby.

The dinner invitation has posed a delicate dilemma for some executives, as they weigh up the reputational risks of attendance.

“I’ve had people asking whether they should go and my advice is that it’s the right thing for shareholders if the US is a major market for the company,” said PR executive. “But they are aware of the potential downsides.”

Some executives are concerned about accidentally antagonising Mr Trump and about what the president might say on Twitter.

A significant number of those invited have businesses that span both sides of the Atlantic. The gathering is partly intended to show Mr Trump the benefits of striking a post-Brexit trade deal with the UK.

The mystery around the location of the dinner was partly a matter of basic security, suggested one invitee, while some executives are sceptical about whether it will go ahead. Other guests suggested that some people might be anxious to avoid being photographed entering or leaving the event.

Several guests have turned down the invitation, some citing prior commitments. Martha Lane Fox, co-founder of Lastminute. com – who was invited – said: “I understand why the government have to entertain Trump but I certainly don’t want to.”

Tom Enders of Airbus has received an invitation, despite saying in January that President Trump would leave a “wreckage” behind him after four or eight years in the White House.

One adviser said some executives probably had their “noses out of joint” because they hadn’t been invited; “My advice is: It’s the president of the US and the prime minister of the UK, why wouldn’t you go?” – Copyright The Financial Times Limited 2018