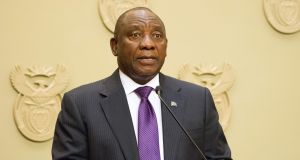 Envoys tasked by President Cyril Ramaphosa to scour the globe for $100 billion in investments for the South African economy arrive in Dublin on Wednesday to engage with state agencies and Irish businesses on potential deals.

Trevor Manuel, who was South Africa’s finance minister from 1996 to 2009, is leading the trade and investment mission that will first meet with agencies like Enterprise Ireland and Bord Bia, who represent 25 Irish companies that are interested in investing in Africa’s largest economy.

Mr Manuel and his team will then participate in round-table discussions on specific topics with all the companies before moving on to one-on-one meetings to address challenges or concerns each business may have around investing in South Africa.

The Irish companies participating in the talks are predominately from the food, energy, engineering, and services sectors.

In April, Mr Manuel was one of a number of economic experts appointed by Mr Ramaphosa to build a global $100-billion “investment book” over the next five years to help plug South Africa’s substantial shortfall of foreign and local direct investment.

The trade and investment engagements are part of a broader mission the South African government is undertaking in Ireland that includes commemorating 25 years of diplomatic relations between the two countries.

The official visit will include the unveiling of the Nelson Mandela centenary exhibition at Kilmainham Gaol Museum in Dublin, which is supported by films, photographs and displays of artefacts that tell the extraordinary life story of South Africa’s first black president.

Called Mandela – Leader, Comrade, Negotiator, Prisoner, Statesman, the exhibition first opened at the Apartheid Museum in Johannesburg in 2008 as part of the celebration of the Mandela’s 90th birthday. Mandela died in 2013.

Irish ambassador to South Africa, Liam MacGabhann, explained that during the talks Mr Manuel would address concerns Irish businesses might have around South Africa’s political, policy and regulatory environment, among other things.

“The companies want to hear positive messages from the South Africans. They want feedback on how feasible their proposals are under the current policies and regulations that govern the different economic sectors in their country,” Mr MacGabhann said.

Political and policy uncertainty damaged global investment and business confidence in South Africa during the nine-year presidency of Mr Ramaphosa’s predecessor, Jacob Zuma, who was forced out of office in February by the ruling African National Congress party.

South Africa’s credit rating was downgraded to junk status by two of the top three ratings agencies in the last year of Mr Zuma’s rule, economic growth also slowed to a crawl, and foreign direct investment dried up.

Research figures for investment between the two countries show that in 2016 Irish companies invested €22 million into South Africa, which in turn invested €420 million into Ireland’s economy.