German industry output bounces back in May

Official data showed output increased by 2.6 per cent, the highest rise since November 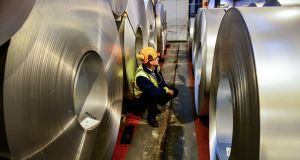 German industrial output bounced back in May, data showed on Friday, suggesting that factories in Europe’s largest economy are gathering steam again after a weak start of the year. Data from the statistics office showed output increased by 2.6 per cent, the highest rise since November.

The reading beat a Reuters forecast for a rise of 0.3 per cent and was only the second rise so far this year. The figure for April was revised to a fall of 1.3 per cent from a previously reported fall of 1.0 per cent. The ministry put down the fall in April to holidays. “The combination of a healthy backlog as well as a comprehensive level orders in May signal that the development in the manufacturing sector remains modestly positive,” it said in a statement. On Wednesday data showed that industrial orders had surged by 2.6 per cent in May after four consecutive monthly drops.

The recent figures dispel concerns about growth in Europe’s largest economy and support expectations that a consumption-driven upswing will continue this year albeit at a slower pace than last year when the economy expanded by 2.5 percent. “May?s industrial data add to the evidence that the weakness in the sector earlier in the year was at least partly down to temporary factors,” Jack Allen of Capital Economics wrote in a note to clients. Cold weather, a flu outbreak and holidays were named as the main source for the weak data in the first four months of the year.

This coincided with fears that restrictive trade measures championed by the US president Donald Trump were clouding the outlook for the German economy, whose export sector relies on free trade for growth. “Overall, economic growth in Germany and the wider euro-zone has clearly slowed since last year, but we think that it will remain fairly strong,” he added. A breakdown of the output data showed that activity in the consumer goods and construction sectors was most vibrant. Carsten Brzeski of ING DiBa said the positive data bodes well for the growth prospects in the second half of the year. - Reuters