Dependence on corporation tax from US firms leaves State vulnerable 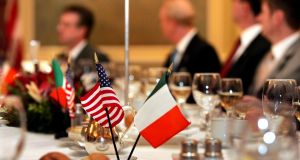 At least half of the more than €8 billion the exchequer will receive this year in corporation tax is attributable to the transfer of profits to Ireland by US multinationals. Photograph: Eric Luke

Since the economy began to recover, the share of corporation tax in government income has dramatically increased. Today this source amounts to more than 10 per cent of government revenue, up from 6.5 per cent in 2014.

Not only are the public finances very dependent on corporation tax receipts, but this revenue is dominated by a handful of companies. That makes it potentially volatile.

According to the Revenue Commissioners, 40 per cent of that revenue comes from just 10 companies. If circumstances changed with the Irish activities of these companies, there could be a very big impact on Irish public finances.

What this highlights is the extent to which Irish corporation tax revenue is affected by US tax law. In the past, US companies were able to delay paying US tax on their profits if they parked the profits abroad. They generally chose as “parking lots” jurisdictions with zero or very low tax rates, such as Ireland.

While the US made major changes to its tax law last year, this has not reduced the incentive for US companies to locate profits earned abroad in low-tax jurisdictions.

One test of the extent to which profits are being transferred is the share of value added accounted for by profits (or wages). Where the profit rate is very high, it is prima facie evidence of profit shifting.

The data on profitability suggests there is very limited transfer of profits to Ireland by foreign multinationals with head offices elsewhere in the European Union.

The detailed data available for the EU shows that German multinationals operating in Ireland have a profit rate of 43 per cent, exactly the same as that for German companies operating outside Germany in other EU countries. This certainly does not suggest any profit shifting to Ireland to avail of the low tax rate.

The reason why EU-based multinationals are not shifting profits to Ireland is that their national tax authorities don’t permit it. This contrasts with US tax law, which has, for decades, facilitated US multinationals to escape paying corporation tax in the US.

Last month, a paper by economists from the US and Denmark, using this approach of examining profit rates, highlighted the extent to which profits were being transferred to low-tax locations such as Ireland. However, one of their conclusions, that other EU states, such as France and Germany, were the losers from this relocation, is not consistent with the data.

The fact that it is primarily US companies that are shifting their profits suggests that it is the US that is the primary loser from this activity. A second small loser is possibly China, because a significant part of the profits transferred to Ireland by US companies is earned on computers and phones manufactured in China.

If these goods were manufactured by a subsidiary company in China, rather than being manufactured on contract, some of the profits might be paid as tax in China.

The dependence of Irish tax revenue on corporation tax from US companies carries two risks. Firstly, a change in US tax law could lead to a sudden outflow. The second risk is the reputational damage done to Ireland due to the widespread perception among our EU colleagues that we are benefiting at their expense.

The solution to the first risk is to save a significant part of the revenue from corporation tax.

At least half of the more than €8 billion that will be received this year is attributable to the transfer of profits to Ireland by US multinationals. In this light, the proposal to save €500 million in a “rainy-day” fund looks too small a buffer.

Countering the reputational damage done to Ireland will be much more difficult. It would help if the Revenue Commissioners published data on corporation tax by the country where multinationals are headquartered, confirming that this is predominantly a US issue.

However, in a world of trade wars, concerns within the EU that these US multinationals are profiting unduly at Europe’s expense will put additional pressure on such companies, and hence on Ireland.