ISIF to be refocused to tackle economic challenges 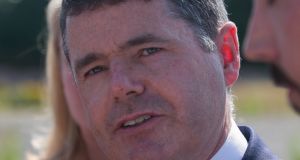 The Government has decided to refocus the €8 billion Ireland Strategic Investment Fund (ISIF) from a broad investment strategy to focus on dealing with key economic challenges facing the country.

Mr Donohoe said that refocusing takes into account the risks that may be posed by economic overheating and aid in the delivery of Project Ireland 2040, a €116 billion national development plan that was unveiled in February.

The Government has previously outlined that €1.5 billion of ISIF funds will be allocated to a rainy day fund, that would help insulate the economy in the event of a future shock, as well as €750 million towards the Home Building Ireland Finance (HBFI) initiative unveiled in the last budget. HBFI would provide finance to developers that are not customers of the National Assets Management Agency (Nama).

Both the rainy day fund and HBFI will require enabling legislation to be established.

1 Suspicions rife as key Brexit trade talks begin in Brussels
2 Life as a Facebook moderator: ‘People are awful. This is what my job has taught me’
3 Corona beer firm reeling after 8% slide due to coronavirus
4 ‘The only time apartments were viable was in . . . Ballsbridge, Killiney and Dalkey’
5 Irish companies restrict travel over coronavirus fears
6 Pharma giant AbbVie warned Government against ‘unfair’ €572m tax bill
7 First time buyers behind large increase in new mortgage approvals
8 How well paid do you think you are? Here’s how to work it out
9 We have little chance of building enough homes to meet election promises
10 Coronavirus: Iseq down 11% in five days as global sell-off is worst week since 2008 crisis
Real news has value SUBSCRIBE