PwC/Irish Times tax summit: Minister says resources will be available to those in need 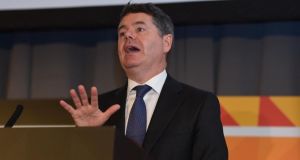 There is a significant risk of a no-deal Brexit on October 31st, Minister for Finance Paschal Donohoe has warned, noting that preparations for such a scenario now had the highest priority across Government.

Speaking at the PwC/Irish Times tax summit in Dublin, Mr Donohoe said the Government was looking at beefing up infrastructure at ports and airports in conjunction with a more heightened Brexit communications programme by Revenue focused on businesses.

He said the UK’s impending exit posed an unprecedented challenge for the island of Ireland. “It is a permanent change in the political and economic environment in which the EU and the UK will exist,” Mr Donohoe said.

Given the lack of clarity regarding the timing and the format the UK’s exit will take, Mr Donohoe said he would be framing next month’s budget on the assumption of a no-deal.

This was to give “certainty to businesses and citizens that the Government is prepared for a no-deal Brexit and stands ready to support the economy,” he said.

He said that in a no- deal scenario the Government would make resources available to support those in need while introducing timely, targeted and temporary supports to the sectors of the economy most exposed.

Mr Donohoe said Irish tax revenues would continue to grow in a no-deal Brexit scenario but the rate of growth would be lower. In addition a possible increase in social-welfare expenditure “will have a significant impact on the public finances regardless of any specific tax changes announced next month”, he said.

On the OECD’s effort to reform the global tax system, Mr Donohoe said the challenge was to build a global and robust tax architecture that worked for all.

Ireland has been at the centre of the storm over multinational tax avoidance because of the aggressive tax strategies deployed here by companies such as Apple and Google.

“Make no mistake, whatever emerges from the discussions at the OECD will be disruptive,” he said, noting the talks were particularly difficult for small open, export-orientated countries such as Ireland.

He said an acknowledgement of the changing nature of where profits were generated in modern economies could produce amendments to the current rules that would satisfy those calling for change.

However, he warned it was important that any move recognised a number of well-established principles, including transfer pricing rules, where profits were shifted to low tax jurisdictions, which he said, remained at the heart of the current framework.

Mr Donohoe also said Ireland’s appeal to the EU’s €13 billion Apple state aid case, which got under way on Tuesday morning, was “very important” to our economic interests.