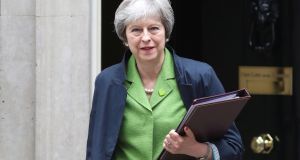 Theresa May: scraped though a key vote on Brexit legislation in the House of Commons on Tuesday. Photograph: Simon Dawson/Reuters

Theresa May scraped through a key vote on Brexit legislation in the House of Commons on Tuesday, though only – it would appear – by making key concessions to those looking for a softer version of Brexit. While there is predictable debate over what was agreed, the UK parliament looks set to have a bigger role in agreeing the shape of the exit package .

This looks like another lurch towards a softer version of Brexit and appears to make a “ no deal” outcome less likely, with the UK government not having parliamentary support for this. But the road from where we are now to softer shade of Brexit still looks very rocky. It is still hard to see how the deal gets done.

This means that for Irish businesses trading with the UK, the uncertainty will just roll on. Economics – and common sense – suggests that the UK and the EU will do a deal on a softer version of Brexit, but politics keeps getting in the way.

The problem in terms of business planning for the thousands of companies trading between Ireland and the UK, or operating supply chains across the two territories, should not be underestimated. The range of possible outcomes remains impossibly wide for planning, particularly for those in the most exposed sectors such as food.The threat of sterling volatility as the inevitable rows in the talks ramp up is also real.

The UK may continue to move towards a softer Brexit, with increasing support apparent in the UK parliament for this route. But the huge political difficulties in London, the red lines in Brussels and, crucially, the shortage of time could still scupper these talks, or at least create huge uncertainty in the months ahead.

Businesses relying on the transition period coming into play next March to ensure that trading rules remain the same until the end of 2020 need to realise that this is far from done and dusted. The transition is part of the overall withdrawal agreement which is not due to be signed off until October, with a number of hurdles – including the “backstop” deal for the Irish Border – to be tied down beforehand.

This is all so volatile and unpredictable because proper negotiations haven’t got beyond the first base, which saw an early outline agreement on the UK’s exit bill. Since then all the action has been in London and while there has been talks between the UK and EU teams, there has been no clarity from London and little high level political involvement from the EU’s big players.

While a motion to give the House of Commons a vote on the withdrawal agreement was defeated on Tuesday , the price was that the proposal would be reconsidered in the Lords and much of its direction accepted. With the balance in the Commons apparently moving to some kind of softer Brexit, this is important and the political game-planning about how this might pan out is already being discussed. But big barriers to progress remain.

The recent interchange between the UK and EU over the Irish Border issue illustrates the difficulty by showing how a hard-fought political compromise in London simply does not cut it in Brussels. The UK’s proposal on the backstop for the Irish Border – the way of avoiding a hard Border if no other way can be found via an eventual trade deal – was politely greeted in Brussels. But it wasn’t long before the EU negotiators were pointing out its shortcomings.

This, in microcosm, is the problem in the whole negotiations. The only solution politically acceptable to all sides in London will be some kind of arrangement which allows the UK to retain a lot of the benefits of membership but frees it of the resulting obligations.

The question now is whether the political sands are shifting fast enough in London to mean concessions can be made in time to achieve a deal by sidelining the Brexit lobby. It still all looks very tricky.

Talk to anyone in the European Commission, or Continental politicians about Brexit and you quickly realise two things. First, they aren’t as worried about it as we are, for obvious reasons.

And second, they are hugely attached to what they call the integrity of the single market, which guarantees free movement of people, capital, goods and services. In other words the UK’s ability to pick and choose one or more of these is severely limited.

If UK politics do move towards a softer Brexit, there are various theories on how this might be structured and what additional measures would be needed in relation to the Irish Border. But whatever the soft Brexit destination, it is still difficult to see how we get to there from where we are now. If the UK wants to remain in the Single Market, for example, how is the issue of freedom of movement to be dealt with?

The next interesting point to watch is how far the EU pushes the UK for assurances on the withdrawal deal at the June summit, particularly in relation to the Irish Border.

But either way this still looks very messy. Irish businesses need to continue to prepare for the worst and some version of a hard Brexit, while still hoping that it might be avoided. And sterling weakness could hit whenever the big row comes, whether that is June or the Autumn. And come it will.