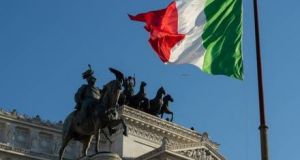 Italian share prices have fallen, and the cost to Italy of raising borrowings has gone up as the new government’s intentions become clear. Photograph: Getty Images

We may be about to witness a game of chicken between a new Italian government and the markets. The two parties involved in forming a government have set out a programme of spending increases and tax cuts which would drive a coach and horses through EU budget rules and send the country’s national debt sharply higher.

Italian share prices have fallen, and the cost to Italy of raising borrowings has gone up as the new government’s intentions become clear.

But this is only a taster of what we will see if they actually push ahead and implement their plans, which, as well as market upheaval, would spark major tensions with Italy’s euro zone partners, the European Commission and the ECB.

In the circular logic of these things, investors are hoping that the threat of upheaval in the markets will be the very thing which causes the new government, comprising the populist Five Star movement and the right-wing League, to pull back on its plans.

But with the programme based on attacking EU budget rules, boosting expenditure, introducing a minimum income and a flat tax rate, what credibility will the new government have if it bins most of its pledges?

A lot will depend on the public mood in a country which has seen static living standards for many years, and shows little love for the European “project”.

The stakes are high, with Italy being one of the big three big euro zone members. National debt is around 130 per cent of GDP – over €2.25 trillion in cash terms.

Italy is unusual as half the debt is owned by domestic financial institutions and another chunk by the public. Yet a sizeable amount is still owed to foreign creditors, enough to spook the markets if there is any talk of a debt default or of Italy crashing out of the euro.

We know from the financial crisis how quickly the mood in markets can turn. If investors really start losing confidence they will sell Italian bonds and pull money out of Italian banks, starting a downward spiral. Both the Italian state and its banks need ongoing access to funding at reasonable rates.

Talk of using a new form of short-term government security to pay people due tax rebates or reimburse government suppliers has also unsettled investors, and will be anathema to the ECB which will fear the development of some parallel currency.

So the new government will be walking a tightrope. If it can’t raise funds from the market at reasonable rates – or money starts flooding out of its banks – it will quickly run into trouble.

Some see a defining moment for the euro zone approaching, and they may be right, although it is hard to forecast how the shifting plates of Italian politics will deal with this.

Debate rages about whether the strictures of euro zone membership or the lack of reform by successive governments are responsible for Italy’s lack of economic progress. If Italy wanted to prosper in the euro zone, much wider reforms of its economy were essential. Equally, the much-discussed inadequacies of the euro zone and its response to the crisis have played their part.

Either way, the public mood has now granted the Five Star Movement and the League a small parliamentary majority, albeit they still face constitutional restrictions in relation to managing the budget.

There has been some relief in the markets that the parties have dropped some of the election campaign rhetoric – suggestions of a poll on euro membership and demands for a writedown of Italian debt among others. However, the list of spending and tax commitments has been costed by some analysts at €100 billion per annum or more when fully implemented, some 5 per cent of Italian GDP.

As well as the game of chicken with the markets, Rome could also now be on a collision course with the other big EU players and institutions. In many ways this clash cuts to the heart of the old questions about how the euro zone should be run and who writes the rules, a debate magnified by the crisis.

The government’s programme is a direct challenge to the northern European-inspired EU rulebook which brought the programmes of austerity and the new budget rules during the crash.

Also, remember that the euro zone itself is still an unfinished project in terms of developing into a fully fledged fiscal and banking union. In particular,the link between sovereign debt and the health of domestic banking systems has not been broken. And no banking system is more exposed to its sovereign debt than Italy’s.

What happens next? Who knows? But if the new government pushes forward with its programme, there will be fireworks.