MCD’s Desmond ‘optimistic’ that Electric Picnic 2020 will go ahead

A record attendance of 70,000 expected for the sold-out event at Stradbally in September 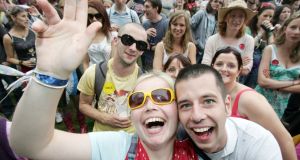 The managing director of Ireland’s largest concert promoter, MCD, remains “optimistic” that this year’s Electric Picnic festival will go ahead.

Denis Desmond said: “It is five months away. I would be optimistic that Electric Picnic will happen but of course we are in uncharted waters here.”

MCD has planned for a record capacity of 70,000 for the sold-out event and acts due to perform on the first weekend of September at Stradbally, Co Laois include The Chemical Brothers, Lewis Capaldi, Picture This and Snow Patrol.

“I’ve no doubt that there will be a relaxation of the restrictions in place but it will probably be some time before we can have 20,000 people in a stadium or in a field,” said Mr Desmond.

He said industry colleagues in China are anticipating a return of major events there in June.

“We are two months behind them and we are not as badly hit with Covid 19. If we are back to normality by July, we would be doing well.”

However, he said it will be September before The Gaiety Theatre in Dublin reopens.

“Riverdance won’t happen there this summer as there is now not enough time to rehearse for a June start.”

However, he hopes the Olympia will reopen in July once an easing of restrictions allows that to happen.

Mr Desmond said MCD has lost “a huge amount of shows” to date this year due to Covid 19.