Republicans more likely to be concerned about economic impact of pandemic than Democrats or independents. 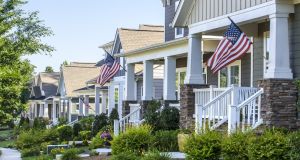 Nearly three-quarters of Americans say the coronavirus pandemic has reduced their family’s income, with nearly half saying they would be without any income at all if they were unable to work because of illness, according to a new poll for the Financial Times.

The survey of likely voters for the FT and the Peter G Peterson Foundation found 73 per cent of Americans said the outbreak had reduced their family’s income, with 24 per cent saying their household income had been cut “very significantly”. Some 48 per cent said they would lose pay if they fell ill and were unable to work.

A record 10 million Americans filed a new claim for unemployment benefits in the two weeks ending on March 28th, as millions of businesses across the country laid off workers and many more reduced employees’ hours or pay.

Ioana Marinescu, a labour economist at the University of Pennsylvania, said the poll suggests the pandemic was rippling broadly through the US economy, not only forcing the closures of main street businesses such as restaurants and bars, but also hitting professional services and marketing companies that rely on business customers, or those that rely on consumer spending.

The FT-Peterson poll, which was conducted between March 24 and March 29, found Americans had changed their behaviour drastically over the past month as a result of the pandemic.

In February, the poll showed only 13 per cent said the outbreak had affected their personal or business activities, such as travel or investments. The new March poll showed that figure had jumped to 71 per cent, with 62 per cent saying they were avoiding public places, 48 per cent changing or cancelling travel plans, and 35 putting off a large purchase.

The findings are part of the monthly FT-Peterson US Economic Monitor, which tracks voter sentiment towards the US economy ahead of November’s presidential election.

The new survey showed a sharp increase in alarm over the state of the global economy. Nearly one-third of respondents cited a worldwide slowdown as the single biggest threat to the US economy, compared with just 12 per cent the month before.

The cost of healthcare, which had been the biggest concern, is now the second most-cited worry, with 20 per cent of respondents saying it was the largest cloud hanging over the US economy.

Only 10 per cent Americans said they or someone they know had contracted the virus, but nearly all - 97 per cent - of respondents said the federal government should guarantee free testing for Covid-19. Ninety-one per cent said health insurers should reimburse coronavirus patients for any treatment costs related to the virus.

Although US President Donald Trump and some of his Republican allies have publicly questioned whether the lockdown’s hit to the economy was worth the public health benefit, the FT-Peterson poll found two-thirds of Americans were more concerned about the virus’s impact on public health than on the economy.

Mr Trump has in recent days reversed track, extending federal guidelines recommending social distancing through the end of April. But the survey showed Republicans were more likely to be concerned about the economic impact of the pandemic than either Democrats or independents.

Forty-five per cent of Republicans said they were more concerned about the outbreak’s impact on the economy than its public health effects, while just 22 per cent of Democrats and 33 per cent of independents put the economy as a bigger concern.

The most recent FT-Peterson Poll was conducted online by Global Strategy Group, a Democratic polling company, and North Star Opinion Research, a Republican group, between March 24th and March 29th. It reflects the opinions of 1,005 likely voters nationwide, and has a margin of error of plus or minus 3 percentage points.