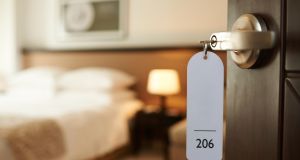 The tourism sector was among the hardest hit in March. Photograph: iStock

Business activity in the State’s services sector registered an unprecedented drop in March, nose-diving into contraction after an implosion in new orders, according to AIB data.

The AIB Irish services purchasing managers’ index (PMI) for March details how the index tumbled from 59.9 in February – a two-year high – to 32.5 last month. Any figure below 50 signals contraction.

“The very sudden and rapid deterioration in business conditions in March is in line with that seen in flash PMI surveys for other countries,” said AIB chief economist Oliver Mangan.

The volume of outstanding business also fell, albeit at a slower rate than new contracts. But the fall was still at the fastest pace since October 2010.

As a result of the decline in new and outstanding business, Irish service providers cut staff for the first time since August 2012 with the transport, tourism and leisure sectors the hardest hit.

Business confidence also collapsed in the month with the 12-month outlook for activity the weakest since the survey began in May 2000, just surpassing the previous low registered in November 2008. Sentiment in financial services was lowest.

Service providers cut their charges for the first time in six years in March, as they attempted to shore up sales amid disruption from the Covid-19 pandemic.

“Overall, the PMI data show that there was an abrupt and rapid contraction in activity in the services sector in March. PMI data also show that manufacturing contracted in the month. Thus, there is little doubt that recessionary conditions have gripped the Irish economy.”

The AIB Ireland services PMI is compiled by IHS Markit from responses to questionnaires sent to a panel of about 400 service sector companies.