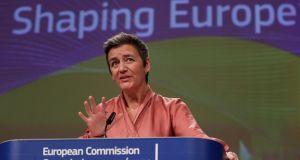 Margrethe Vestager, the competition commissioner, said the scheme would “help companies affected by the coronavirus outbreak to weather this crisis and bounce back strongly afterwards”.

The European Commission has approved a €200 million State scheme to provide loans to Irish manufacturing or exporting businesses that are struggling during the Covid-19 restrictions.

Margrethe Vestager, the competition commissioner, gave the green light to the scheme, which she said would “help companies affected by the coronavirus outbreak to weather this crisis and bounce back strongly afterwards”.

The loan scheme was approved under a new temporary European Union framework introduced two weeks ago to relax the normally-strict state-aid rules to battle the economic effects of the virus.

“With this €200 million Irish scheme . . . we continue to work with member states to ensure timely support to the economy through these difficult times,” said Ms Vestager.

The loan scheme was part of a package of business support measures announced by Heather Humphreys, the Minister for Business, at the outset of the crisis three weeks ago. It is administered by Enterprise Ireland.

Manufacturers and exporters with at least 10 staff, and which fear turnover will fall by at least 15 per cent, can apply for loans of between €25,000 and €800,000 for liquidity to tide them through the crisis. The scheme is limited to companies with annual sales of less than €500 million.

The loans can be used for purposes such as restructuring or to plug holes in liquidity. The €200 million scheme is run in addition to a separate €200 million loans fund run by the State bank, the Strategic Banking Corporation of Ireland, to provide working capital supports.