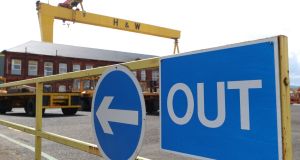 Administrators appointed to Harland and Wolff shipyard will file for insolvency at the High Court in Belfast today.

Royal Bank of Scotland (RBS) executives have said it could be another four years before the group’s Ulster Bank unit in the Republic will be making enough money to break even on the cost of its own funding – a decade and a half after the financial crisis.

Workers at Harland and Wolff intend to continue their fight to save the historic Belfast shipyard and will continue to protest and occupy the yard despite administrators being appointed, according to union leaders. The administrators will file for insolvency at the High Court in Belfast today.

Analysing the reasons for the shipyard’s trouble, author and journalist Eamonn Fingleton argues its roots lie with economic mismanagement in London, where successive governments have put the UK’s heavy engineering industry on the backburner.

It was a day of severe market jitters over continuing fears about the implications of the growing US-China trade war. The renminbi weakened on Monday beyond Rmb7 per US dollar for the first time since the 2008 global financial crisis. The market interest rate – or yield – on Ireland’s 10-year bonds fell below zero per cent for the first time on Monday, as investors globally piled out of stocks and into government bonds as trade relations between the US and China worsened.

Against this backdrop, heightened worries of a no-deal Brexit and the growing probability of a UK general election after the October Brexit deadline kept the pound subdued on Monday, after it hit a 23-month low against the euro.

Irish retailer Eason is to expand its company-owned store network after agreeing to acquire the trading businesses of six franchised stores. Ciarán Hancock has the details.

Joe Brennan reports on how investors in Ryanair, whose stock has fallen almost 15 per cent so far this year, are “highly sceptical” about the carrier’s ability to deliver a rebound in fares in the second six months of its financial year to the end of next March, after a weak first-half, according to analysts in Deutsche Bank.

Oil and gas explorer Providence Resources, whose shares have been rattled in the past two months by funding delays for its main project, saw its shares tumble as much as 34 per cent in London as the company reported its cash level has dwindled to $1.45 million (€1.3 million).

As the Premier League returns this Saturday, Laura Slattery’s media and marketing column asks whether flush sports start-ups like The Athletic give older media players a kicking?

In personal finance Fiona Reddan looks into how your TV licence fee is spent, Proinsias O’Mahony explains why picking those few winners is next to impossible so that’s why diversification pays dividends, and Dominic Coyle tackles a tricky reader query on cross-border inheritance tax.