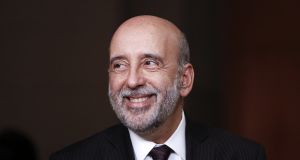 Gabriel Makhlouf is due to take up his new role as governor of the Central Bank next month. Photograph: Bloomberg

The Central Bank Commission discussed how to contain any potential fallout from the controversy which engulfed its incoming governor, a person familiar with the matter said.

In June, Gabriel Makhlouf, New Zealand’s top treasury official at the time, escaped dismissal with a rebuke from authorities for failing to take responsibility for a security breach around sensitive budget information. He was appointed as governor of the Central Bank of Ireland in May, and takes up the role next month.

The commission in Dublin, which oversees the Central Bank’s management, discussed whether the furore could leave Mr Makhlouf vulnerable and on the back foot if future controversies in Ireland were to erupt, according to the person, who asked not be identified. In June, Labour called for the appointment to be suspended as the row in New Zealand raged.

The discussions by the commission centred on how best to aid Mr Makhlouf in his new role rather than featuring any effort to derail his appointment, the person said. Though some members have more concerns than others, as a group they see a planned statement by Mr Makhlouf on the affair when he takes up the role as key to drawing a line under it, strengthening his position and ensuring the Central Bank remains unharmed, the person said.

Members of the the commission see the need for a strong, independent governor as especially important, as potential conflicts loom over issues such as mortgage rules, the person said. Taoiseach Leo Varadkar said last month that he’d like to see some Central Bank rules limiting mortgages relaxed, to help people to buy homes.

It emerged this week that two former governors of the Central Bank – Philip Lane and Patrick Honohan – raised concerns with senior figures in Government around the recent appointment of their successor. It was also disclosed that the European Central Bank (ECB) had raised a number concerns over the Government’s choice of Mr Makhlouf as new governor.

A spokesman for the ECB told Bloomberg meanwhile that the institution isn’t involved in the appointment procedures of national governors. The Department of Finance said it received no objection from the ECB.

Mr Makhlouf “was selected as the new governor following a competitive, international process and was deemed to be the most suitable candidate for the role. The appointment is made under national legislation,” the department said. “Furthermore, it is his intention to obtain an EU passport, to which he is entitled, following his arrival in Ireland later this year.”

The commission consists of the governor and two deputy governors, the head of the Department of Finance, and six members appointed by the department.

A spokesperson for the Central Bank said that while the governor’s appointment is a matter for the Government, it would be expected that the commission would be involved in the preparation for a new chief. Commission members met the incoming governor when he visited the bank recently as part of a series of meetings he held there in advance of his new role, the spokesperson said.

1 Should my mam wait for house prices to drop before buying?
2 Hangover for the drinks sector as pint sales go flat
3 Brother is dragging his heels as executor of uncle’s will - is there anything I can do?
4 Health insurance customers to get €180m in refunds
5 Revenue faces US drug company Perrigo over disputed €1.64bn tax bill
6 Covid-19 mortgage breaks: What’s the catch?
7 Almost 70% of home buyers to purchase within next year
8 British consumers ramp up repayments amid Covid-19 lockdown
9 Supermarkets see fastest pace of sales growth in 15 years
10 Visa signs seven-year card deal with Permanent TSB
Real news has value SUBSCRIBE