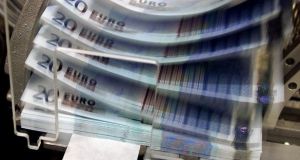 The source of market nervousness on Monday was centred around China letting the value of its currency, the yuan, fall below $7 for the first time since 2008

The market interest rate – or yield – on Ireland’s 10-year bonds fell below zero per cent for the first time on Monday, as investors globally piled out of stocks and into government bonds as trade relations between the US and China worsened.

The yield on 10-year Irish bonds, which had started the year at 1 per cent and were as high as 14 per cent at the height of the financial crisis in 2011, fell to minus 0.001 per cent in early trading on Monday. However, the yield subsequently picked up into marginal positive territory.

There is an inverse relationship between the price of bonds and bond yields. Government bonds are seen as a safe haven for investors during times of market volatility.

The source of market nervousness on Monday was centred around China letting the value of its currency, the yuan, fall below $7 for the first time since 2008, fuelling fears of a currency war as Beijing seeks to counter US president Donald Trump’s latest tariff threat.

The yuan declined 0.9 per cent in mainland trading last week, its biggest loss since mid-May, after Mr Trump abruptly escalated the trade war by announcing plans to impose new tariffs on Chinese goods from September. Beijing pledged to respond if the US goes ahead with a plan to impose a 10 per cent tariff on a further $300 billion in Chinese imports.

“It appears that the tariffs hike suggests the return of tit-for-tat moves and a suspension of trade talks, and the PBOC [People’s Bank of China, the country’s central bank] sees no need to keep the yuan stable in the near-term,” said Ken Cheung, a senior currency strategist at Mizuho Bank Ltd.

European bonds had already been under pressure in recent months as investors have priced in the European Central Bank (ECB), keeping its main interest rates at low levels for an extended period of time as the euro zone economy weakens.

Bond yields from Spain to Germany fell to all-time lows on Monday, with German bund yields declining to minus 0.52 per cent.

The rise in the value of Irish government bonds on Monday was in contrast with the stock market in Dublin, with the Iseq falling as much as 2.7 per cent in quiet bank holiday trading to 5,817.99, its lowest level since February.