Only 10% of businesses preparing for no-deal Brexit

IntertradeIreland’s director of strategy and policy describes figures as ‘worrying’ 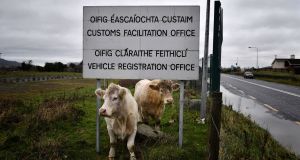 Cows stand beneath a sign for the diused Customs Office along the Irish Border in Newry, Northern Ireland. Photograph: Charles McQuillan/Getty Images

Only one-in-10 businesses are preparing for a no-deal Brexit despite the fact that many of them see it as serious threat, cross-border body, IntertradeIreland, warns.

IntertradeIreland’s all-island business monitor for the three months to the end of June, published on Monday, shows that 40 per cent of companies reported growth for the period but few expect further expansion over the coming year.

The all-Ireland trade body finds that 45 per cent of businesses blame the UK’s scheduled departure from the EU at the end of October for this uncertainty, which rises to almost 60 per cent amongst manufacturers.

However, only 11 per cent of companies that contributed to the Business Monitor say that they have made any preparations for the UK crashing out of the trade bloc without a deal.

More than four fifths of cross-border traders, who would be most exposed should the UK leave with no deal, have not prepared for that outcome, Intertrade Ireland says.

The organisation adds that only 14 per cent of these enterprises have examined how customs could affect their activities, while just 12 per cent have weighed the potential impact of tariffs on their business.

Bigger companies with more capacity are best prepared for a no-deal Brexit, with 35 per cent saying that they have taken steps to deal with this outcome. At the other end, Intertrade says that just 10 per cent of “micro-businesses” have made any preparations.

Aidan Gough, IntertradeIreland’s director of strategy and policy, described as “worrying” the disparity between the number of businesses highlighting Brexit as a risk and actually preparing for it.

He implored firms, particularly those trading across the Border, to inform themselves of the threats that Brexit could pose their operations and find out how to mitigate them.

He pointed out that there are numerous supports for businesses in this situation, including information that Intertrade itself provides and grants of up to €5,000/£4,500 sterling to help pay for expert advice.

“Don’t leave it until the last minute,” Mr Gough warned on Monday. “There are lots of small steps that businesses can begin to take now to prepare, whatever the outcome. It doesn’t have to be onerous. Planning is never wasted and is much preferable to panic if left undone.”

Mr Gough also said ongoing Brexit uncertainty could create longer-term problems as it meant that many businesses were not prepared for the far-reaching technology changes approaching in the near future.

1 Opioid executive admits to ‘no morals’ ahead of prison term
2 South Dublin Credit Union members urged to borrow more to ensure survival
3 RTÉ’s multiple lobbying meetings with politicians
4 Farmer seeks to challenge €3.6bn Intel plan in High Court
5 Who are Ireland’s 17 billionaires?
6 My father in a nursing home wants to gift me his house
7 Ireland v the rest of the world: Do we pay too much tax?
8 Ryanair wants Irish courts to block Skyscanner from selling its flights
9 Fallon & Byrne founders McHugh and Byrne exit group
10 Cathay Pacific to resume Dublin-Hong Kong flights in March
Real news has value SUBSCRIBE