Harland and Wolff appoints administrators after failing to find a buyer 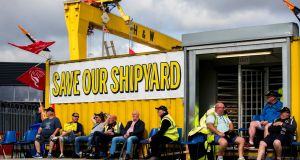 Workers last week locked themselves into the yard and refused to leave in a bid to take control of a process they fear will deprive them of their jobs. Photograph: PA

Workers at Harland and Wolff intend to continue their fight to save the historic Belfast shipyard and will continue to protest and occupy the yard despite administrators being appointed, according to union leaders.

The business advisory firm BDO has been formally appointed as administrators to the shipyard and Harland and Wolff will file for insolvency at the High Court in Belfast on Tuesday.

The administrators have met with both union officials and Harland and Wolff’s remaining workforce of about 130 people to outline the next stage in the process.

It is understood that although a very serious threat of redundancy hangs over the workforce at this time both unions and administrators are in discussions to try to ensure that the workforce “maintains their employment contracts”.

Susan Fitzgerald, Unite’s regional co-ordinating officer, said it is vital that Harland and Wolff is now sold as a “going concern”.

But Ms Fitzgerald said there is still hope, despite the administrators being called in, that there can be a future for the yard.

“But what we need is for Harland and Wolff not to be broken up – not to be sold to a vulture company, an asset stripper or a brand stripper and we also do not want to see a situation develop where the shipyard could sold without liabilities like pensions and workers contracts,” Ms Fitzgerald added.

She also believes there is still an opportunity for the UK government to intervene in the crisis facing the shipyard even though the government insists it is a “commercial issue”.

Harland and Wolff had asked the UK government for “shortfall funding” of £650,000 (€705,000) to buy it time to find a way out of its current problems but the UK government said this would directly contravene EU state aid rules.

“We think it is farcical that a Conservative government is using the EU as a way out. Boris Johnson has it in his gift to save Harland and Wolff – the UK government could still take an equity stake in the yard and throw both the workers and throw the shipyard a lifeline.

“It would be much cheaper for Boris Johnson in the long run to help save Harland and Wolff because the shipyard contributes £10.8 million to the Northern Ireland economy every year just in terms of wages and taxes. We still believe that the best option would be for Harland and Wolff to be renationalised by the UK government,” Ms Fitzgerald added.

Michael Mulholland, regional organiser for the GMB Union in Northern Ireland, said workers remain upbeat that a rescue deal can be done to save the yard.

“We need to secure a buyer for the yard – we are appealing to potential buyers to look at Harland and Wolff and see the skills and opportunities that are available here, we have identified that there are contracts that the yard could bid on and if they won them this could potentially secure a pipeline of work worth up to £70 million.

“In the last few months the shipyard hasn’t been able to bid for work because it has been caught up in a sale process and because it was narrowed down to one organisation who was involved in exclusive negotiations Harland and Wolff couldn’t move forward.

“But the battle to save Harland and Wolff isn’t over yet,” Mr Mulholland said.

The yard, whose huge yellow cranes tower over central Belfast, remains one of the most potent symbols of the city’s past as an industrial engine of the British Empire.

It employed more than 30,000 in its second World War heyday but has been in decline for over half a century and now employs 130 full-time workers, specialising in energy and marine engineering projects.

Workers last week locked themselves into the yard and refused to leave in a bid to take control of a process they fear will deprive them of their jobs.