Eerie silence as Harland and Wolff goes into administration 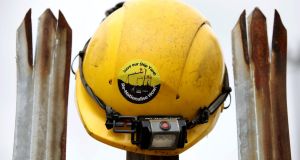 Down tools: a Harland and Wolff worker’s helmet on railings near the shipyard in Belfast on August 5th. Photograph: Paul Faith/AFPGetty

There was no downing of tools. No sound of a horn signalling the end of a working day.

Instead the countdown to the final hours of Harland and Wolff, once one of Europe’s great shipbuilders, was almost eerily quiet inside its headquarters at Queen’s Island in east Belfast.

Suits not hard hats were to the fore as the lifeforce of the historic shipyard ebbed away on Monday evening while workers outside the shipyard gates loudly protested that they would fight on, that it was not the end for the yard that built the Titanic.

But inside more than 150 years of history was sinking into the unknown as administrators took control of the company.

Harland and Wolff was once the North’s economic powerhouse, helping to establish Belfast as a leading maritime city and boasting a workforce of 35,000 people. Its giant yellow cranes, known locally as Samson and Goliath, are an emotional anchor for the city, a lasting reminder that once Belfast led the world when it came to shipbuilding.

But it has not always been plain sailing for Harland and Wolff despite its illustrious industrial history.

In 1989 it was sold to a management/employee consortium backed by the Norwegian group Fred Olsen.

But the shipyard still repeatedly needed British government money to keep it afloat – some estimates suggest that overall the company has received in the region of £1 billion (€1.08 billion) of UK government funding since it returned to private hands.

Part of the ongoing problems has been its inability to keep up with its early pioneering approach: time repeatedly caught up with Harland and Wolff.

When it was first established in 1861 by Edward Harland and his former personal assistant Gustav Wilhelm Wolff, its innovative, groundbreaking, patented designs impressed the commercial shipping sector while its ocean liners were the envy of the world.

Endorsed by the influential White Star Line, it built the tragic Titanic, the Olympic and the Britannic ocean liners for the company. But by the 1950s Harland and Wolff’s market was beginning to decline as air-travel took off and it began to struggle with emerging industry competitors in other markets, particularly Asia, resulting in yet another financial crisis.

By 1987 the then Northern Ireland secretary of state believed that the shipyard should be closed because of its spiralling losses and cash difficulties.

Despite a lack of orders Harland and Wolff remained operating and in total built 1,742 ships, the last of which was the 22,000 tonne Anvil Point which set sail from Belfast in 2003.

In recent years the shipyard has specialised in heavy marine engineering and ship repair. It also designs, creates installations and provides services for the off-shore and renewable energy sectors. But it has been unable to untangle itself from its parent company’s complicated financial affairs.

For the past year Dolphin Drilling ASA, formerly known as Fred Olsen Energy, has tried without any success to find a buyer for the shipyard.

Left bobbing in its parent’s financial wake Harland and Wolff has struggled to keep its head above water and now, without a new lifeline, the historic yard could go under this time for good.