Youth council calls for €15m investment in apprenticeships and training 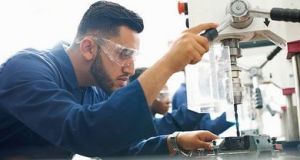 There are currently more than 16,000 young people on apprenticeship programmes. Photograph: Getty Images

Investing €15 million in apprenticeships and training could halve long-term youth unemployment by 2020, the National Youth Council has said.

In a pre-budget submission the council has also called for enhanced youth work services and schemes to encourage more women into apprenticeships.

The deputy director of the National Youth Council of Ireland, James Doorley, said the group was calling for an overall investment of €14.9 million in education, training and apprenticeships to cut long-term youth unemployment by next year.

“Census 2016 indicates that our population aged 10-24 years will increase to over one million by 2025, so we need to invest in policies, services and supports to meet the needs of young people today, while preparing for demographic pressures in the coming years.”

“We welcome job growth in the Irish economy and the consistent trend of reduced youth unemployment. However, we are concerned that the youth unemployment rate is still over 10 per cent, and that almost 6,000 young people are long-term unemployed for 12 months or more.”

Among the measures proposed is an investment of €2.5 million in an “access to apprenticeship” programme.

The council said targeted measures were needed to increase the number of women in apprenticeships.

“We support the overall Government commitment to increase the number of new apprentices, but more needs to be done to open up apprenticeships to young women, young people with disabilities, ethnic minorities and young people who are economically and socially disadvantaged and those who have limited formal qualifications.

“At present only 2 per cent of apprentices are young women and 2.8 per cent have a disability. There is no data available on other categories such as young people who are socially and economically disadvantaged or those from a minority ethnic background.

“As we expand the number and range of apprenticeships, it is vital that these opportunities remain open to all young people, especially disadvantaged and under-represented groups. At present the Government provides no funding to targeted measures to improve access to apprenticeships,” added Mr Doorley.

The group also wants an additional €4.4 million to support up to 1,000 young people under 26 into employment through the Back to Education Scheme, and an additional €3 million for the Job Plus Youth scheme which provides financial support to employers to recruit young people who are unemployed.

In the pre-budget submission the group says Ireland “must avoid creating an environment where young people see no future and are enticed into extremist and far-right politics. This budget is an opportunity for the Government to undo the damage of austerity, and to meet the needs of a growing youth population.”