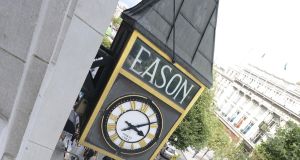 Irish retailer Eason is to expand its company-owned store network after agreeing to acquire the trading businesses of six franchised stores.

The sum being paid by Eason has not been disclosed but it is understood that this move will add €5 million to its annual turnover and is expected to boost its profitability.

The six stores are currently operated by existing franchisees David Power and Tony Flanagan. The transaction is subject to due diligence and is expected to close by the end of September.

The stores are located in Kilkenny, Clonmel, Balbriggan, Maynooth, Arklow and Ennis. It is understood that staff were informed of the deal last Friday.

This move is part of a wider restructuring of Eason by its board, which is chaired by David Dilger. This has included separating the trading businesses and its properties, which are being sold to generate funds for investment into its retail operations, and to release funds for shareholders.

In a recent update to shareholders, Mr Dilger said Eason was “continuously reviewing the size and nature of its retail footprint to maximise business performance, while delivering on its retail offering and customer experience”.

This move will expand Eason’s company-operated store network to 40 overall (33 in the Republic and seven in Northern Ireland).

Mr Power and Mr Flanagan will continue to operate their remaining outlets in the convenience and food sectors, including two Eason stores in Connolly and Kent rail stations in Dublin and Cork respectively. They are expected to use the proceeds of the sale to expand their other businesses.

Eason last year recorded its highest profit since 2006, but turnover was down due to the challenging trading environment

A consultation process has commenced with the 50 employees at the six stores about the transfer of their contracts to Eason. The transfer will be undertaken on the basis that all existing terms and conditions will be maintained.

Eason last year recorded its highest profit since 2006, but turnover was down due to the challenging trading environment that continues to threaten its bricks-and-mortar retail business.

It made an after-tax profit of just under €4 million in the year to January 27th, 2019, which compared to a loss of €3.9 million a year earlier and reflected the benefit of a €3.7 million tax credit relating to property valuations.

Turnover in the Republic fell by 3 per cent to €115.6 million, though its retail revenues were on a par with the previous year. Wholesale revenues declined by 36 per cent year-on-year.

It closed the year debt-free, with cash balances of €31 million. This included €2 million in cash from trading activities and €19 million from the sale of its St Margaret’s warehouse in Dublin.