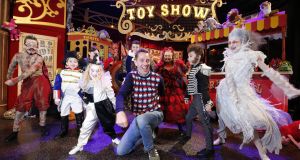 Presenter Ryan Tubridy on the set of The Late Late Toy Show 2018 with some of its young stars. Photograph: Nick Bradshaw

It costs €10 million a year just to collect, while the Government automatically stumps up some €55 million every year to pay for “free” licences for the over-70s. It also has a high evasion rate. And changing viewing habits means the future revenue stream is at risk.

But, amid moves to reform it, we take a look at exactly how your licence fee is spent, and wonder whether a little bit of efficiency – as opposed to an increase in the fee – could deliver rewards at a lower cost to all?

Currently collected by An Post, revenue from the TV licence is used to fund RTÉ’s radio and TV broadcasting activities, as well as supporting the Broadcasting Funding Scheme, which provides funding in support of programmes on Irish culture, heritage and experience, and programmes to improve adult literacy.

Everyone who owns a television in Ireland must pay €160 a year for it and, last year, total licence fee revenues amounted to some €221 million.

Of the total revenue collected, €189.1 million (86 per cent) was received by RTÉ. The remaining licence fee income, €31.9 million, was used to pay An Post collection costs and related charges, to provide funding for the BAI Sound & Vision Fund and to part-fund TG4.

The largest beneficiary by far of the licence fee, as might be expected, perhaps, are RTÉ’s two television channels, with RTÉ One receiving €48.5 million last year and RTÉ Two €25 million.

Together, this comes to €73.5 million, and accounts for 46 per cent of total licence fee revenue. It is, however, a sharp reduction on what the station used to get. Back in 2007, for example, RTÉ received €91.6 million from the TV licence for its two channels. Since then, RTÉ One has taken the biggest hit, as its funds are down by 24 per cent since then.

But, as we’ll see further on, both the radio and TV channels also receive further compensation from the licence fee, in the form of the BAI helping to fund programmes which are subsequently broadcast on RTÉ.

This portion of your licence fee goes to help the funding of four radio stations: Radio 1, 2FM, Raidió na Gaeltachta (RnaG) and Lyric.

The Irish language station gets about €33 million in grant aid to broadcast as gaeilge every year, and is also entitled to a certain amount of TV licence receipts. Last year, it received some €8.12 million in funds from the licence fee receipts.

Under legislation, some 7 per cent of the net receipts must go to the Broadcasting Fund, which is operated by the Broadcasting Authority of Ireland (BAI). In 2018, for example, the fund received a payment of €10.5 million, plus a levy of €1.35 million, from licence fee revenue. The BAI uses this to help fund programmes, many of which are then shown or broadcast on RTÉ television and radio.

RTÉ’s online services were the biggest gainers last year, getting an allocation of €7.7 million, up from €4.7 million the previous year. But this money is likely taken from other resources. Back in 2007, for example, no contribution was made to online services.

Now RTÉ is developing original content specifically for its Player service – such as The Doireann Project, featuring Doireann Garrihy, the 26-year-old social media sensation – as part of its plans to ramp up the Netflix-like service. And this will cost money.

Running RTÉ also takes a chunk of the licence fee, but there has been recent focus on the broadcaster’s costs. Back in January, Minister for Communications Richard Bruton pledged to raise the issue of high salaries with the broadcaster – it costs about €3 million a year to pay the 10 leading presenters’ wages, for example.

Despite rapid advances in technology, a major challenge to maximising television licence receipts remains the charges associated with collecting it.

An Post is the third party charged by the Department of Communications with collecting it in Ireland – and the process is expensive. The collection contract will, however, be put out to tender later this year. According to the latest annual report from RTÉ, some €9.59 million was spent on collecting licence fees last year, up slightly on 2017.

And this figure has been steady for more than 10 years now. Back in 2007, for example, collection fees stood at some €9.44 million. That shows that the process for collecting the licence has become no more efficient – or less costly – over this period.

According to RTÉ, collection costs – at some 4 per cent of the revenue collected –are more than double that in other European countries. In the UK, for example, costs have been cut back to 2.6 per cent of the total yield, down from 3.5 per cent in 2010.

It also makes the current collection process considerably more expensive than other means of raising levies and taxes.

Revenue, for example, puts the cost of collecting some €55 billion in taxes every year at about €424.8 million (and that’s for all its costs). This gives a cost of collection as a percentage of the yield at just 0.77 per cent; An Post, on the other hand, has a ratio of 4.5 per cent. And this increases to more than 5 per cent when you discount the funds that are automatically collected from the Department of Employment Affairs and Social Protection (see below).

Another issue with collection is the high evasion rate. While Revenue has succeeded in obtaining a 98 per cent compliance rate for the property tax, latest evasion levels for the TV licence have been put at about 14 per cent. That means around €40 million a year is never collected. If all this revenue was to be collected, it would be almost equivalent to the entire contribution RTÉ 1 receives.

Contrast this with Germany, where evasion rates are as low as 2 per cent, or the UK (6.5 per cent) and Austria (4 per cent). Denmark, however, has higher rates, at 10.1 per cent, according to figures from 2017.

Another issue with collection is the move towards watching streaming channels on smartphones and tablets and away from television sets. It means that the numbers claiming an exemption because they don’t have a TV have soared from 41,000 in 2009 to 130,000 in 2016, leading to a further reduction of some €18 million in licence fee revenue. This issue will be addressed by a new device-based charge in five years’ time.

Part-funding the national symphony and concert orchestras is also part of the remit of the licence fee.

Another point worth considering when it comes to the TV licence is just how much “free” licences cost the Government.

In the UK, there was uproar recently when the BBC announced that some 3.7 million British pensioners aged over 75 would lose their entitlement to a free licence. Unlike in Ireland, where the provision of licences to the elder cohort is the responsibility of the Government, in the UK, it is the broadcaster itself, the BBC, which must shoulder the cost of these free licences. And it says many of the over-75s are sufficiently wealthy to pay for the licence themselves, and that it can no longer afford to subsidise them.

Here in Ireland, however, there have been no moves to cut eligibility.

Most recent figures show that the Department issued 443,580 free TV licences last year, up by 2 per cent on 2017, as part of the Household Benefits Scheme. This scheme, which offers an allowance towards energy costs as well as a free TV licence, is available to everyone aged over 70 and to people under age 70 in certain circumstances.

While “free” to pensioners, these licences still come at a cost, which the Government pays. In 2018, it handed over some €54.8 million, up by 3 per cent on 2017, to cover the cost. This works out at a cost of about €124 per licence, and the discount is applied in “recognition of the fact that there is full compliance and no collection costs associated with this cohort of customers”, according to a spokeswoman for the department.

The figure will increase again this year. According to the department, the estimated spend on the TV licence this year is €59.9 million for some 448,000 households, up by 9.3 per cent on last year. It comes on the back of a commitment made in last year’s budget to reinstate an additional €5 million from the Department that was cut back in 2014.

So what happens next? As outlined above, the current system appears unsustainable on many fronts. Collection and evasion costs are an obvious issue. Cutting these could boost the amount available for programming without hitting consumers.

Those involved in broadcasting argue that more money is needed to uphold standards in programming. As a spokesman for RTÉ notes, “Licence fee evasion in Ireland, which is among the highest in Europe, combined with the growing number of non-TV homes consuming RTÉ content on other devices, high costs of collection and non-restored cuts to licence fee funding since 2010, costs RTÉ, and Ireland’s broader independent production sector, more than €50 million in lost funding every year. “

There’s no easy solution, then.