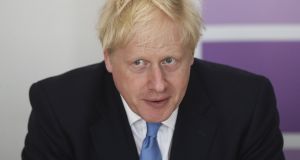 Boris Johnson: he seems to think his treasury is home to a secret multibillion stash of used fivers. Photograph: EPA

Britain is budgeting for Brexit: £2.1 billion (€2.3bn) being the latest announcement of cash devoted to no-deal planning. It’s not clear how much of that is new spending given the £4 billion they have already frittered away but, in any event, it’s likely to be small beer considering the budget boost being prepared by the new UK chancellor. In the fiscally illiterate minds of the new British cabinet there is a locked safe in the treasury where the ex-chancellor hid £27 billion in used fivers.

There isn’t any such cash pile. That £27 billion was a purely notional sum that Philip Hammond posited as the difference between two possibilities: the deficit target minus its probable outturn in the event of a negotiated Brexit. It was money he was prepared to use to cushion the economy against the negative effects of an agreed Brexit deal. Note the use of the words agreed and deal.

Arithmetic, let alone fiscal detail, is, of course, entirely beside the point. The point now is a no-deal Brexit at any cost. Members of the ERG faction – better now described as the core of the Tory party – now say they won’t accept the withdrawal agreement even if the backstop is dropped. How many times can it be said before the penny drops: nothing will ever satisfy these people. Eminent philosopher AC Grayling this week described Brexit as a suicide cult.

The Tory party’s war with itself over Europe goes back at least two generations. The battle lines of today were drawn long ago.

Enoch Powell, a Tory grandee who combined massive intellect with a hatred of the European project, wasn’t known for his fondness of immigrants. Margaret Thatcher’s official biographer, Charles Moore, credits Powell with the defeat of the Conservative government in the 1974 general election after the sitting Tory MP urged people to vote Labour on the grounds that it was the party opposed to EEC membership.

Another factor in then prime minister Ted Heath’s demise was his break with the Ulster Unionists following a suspension of Stormont. Some things change but many do not.

This is a forever war: it will continue for as long as the Tory party exists. Britain is on its third post-Brexit referendum prime minister. There is a common theme running through much Brexit commentary: reality will one day dawn and Britain will be brought to its senses. Sadly, anybody who thinks reason will spontaneously emerge is as unaware of history as the Brexiteers.

Daily attacks on Brussels and the Irish Government are a clear pointer to a scapegoating strategy that is as dangerous as it is transparent.

And there is a strategy, a script straight from the Steve Bannon playbook: create chaos – even a national crisis – line up those scapegoats, call a general election, steal Nigel Farage’s votes by moving to his right and enjoy running against Jeremy Corbyn. All things considered it stands a reasonable chance of giving Boris Johnson at least five years as prime minister.

The problem with budgetary arithmetic is that it is one of those realities that eventually punches you in the face. And the reality of sterling’s renewed decline is a sharp reminder of what can happen if you promise to drive the economy over a cliff.

We might be tempted to ask why all this fiscal incontinence is necessary when Brexit with or (especially) without a deal is supposed to promise so much. Understanding comes with the realisation that hardcore Brexiteers know that the punch, the economic hit, is coming and don’t care. They have that victim-based strategy prepared. And have watched Donald Trump prepare for his re-election with similar policies, including massive fiscal expansion.

Money that does not exist will be spent and taxes cut. The Bank of England will have to print that cash and markets tapped for more borrowing.

The final figure will be orders of magnitude greater than £27 billion. Hammond has suggested £90 billion. There is a neat circle to all of this: the effects of Cameron/Osborne fiscal austerity helped to bring about Brexit. Now Brexit brings an end to austerity

On plausible estimates the Irish economy could be hit harder than the UK by no-deal. The British are clearly planning a big fiscal response. Shouldn’t we do the same?

We have to play by different rules, but one of the consequences of no-deal should, in my view, be a nod from the EU that a much larger than planned Irish budget deficit will be tolerated, if not welcomed. Noises from Brussels suggest that this is on the cards. Aid from the EU should also be on the same agenda as domestic help for the hardest hit sectors.

Powder, such as it is, needs to be kept dry and directed at the problems if and when they emerge.

Detailed planning for the myriad possibilities is pointless: wait for the storm and deal with it when it comes. I have argued several times that nothing much by way of budgetary changes should happen until we know more.

Do not underestimate how much Britain has changed, and how volatile things could become. Thatcher once said, “to enter into commercial obligations and treaties is an exercise of sovereignty, not a derogation from it”. For that she would, in today’s Britain, be labelled “an enemy of the people”.

1 Aldi to impose limits as Christmas toys go on sale
2 First look: Is the iPhone 12 Pro the best smartphone out there?
3 Irish elearning company LearnUpon closes €47.4 million investment
4 Fair deal? Family at odds with hospital and each other not so sure
5 Ryanair lags rivals as Covid-19 vaccine hopes buoy markets
6 Irish house prices could buck European trend and fall this year, says S&P
7 What to consider if older person or loved one needs care at home
8 Streaming services set for Christmas battle after drama-filled year
9 ‘Tailored’ loan relief better than blanket breaks as Level 5 looms - Central Bank
10 US set to unveil antitrust case against Google
Real news has value SUBSCRIBE