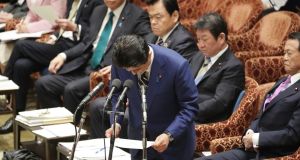 Japan’s prime minister Shinzo Abe’s government has already launched a fresh fiscal stimulus to take effect this year, offering some support to demand but making it difficult to add any further spending or tax cuts in the short term. Photograph: Getty Images

Economists have warned Japan is on course for a technical recession, as the impact of the coronavirus outbreak threatens to compound a dire final quarter of 2019 that saw the economy shrink at an annualised rate of 6.3 per cent.

Gross domestic product data published on Monday came in well below analysts’ expectations of a 3.7 per cent decline, causing several to cut their forecasts for the first quarter of 2020 in anticipation of a further contraction. That implies Japan is facing a technical recession, defined as two consecutive quarters of falling output.

The weak output data for the final quarter of 2019 demonstrated that last autumn’s rise in consumption tax hit the economy even before this year’s coronavirus outbreak shut down tourism from China and disrupted supply chains for Japanese companies.

The rise in consumption tax hit the economy almost as hard as a similar increase in 2014, suggesting that stimulus measures that Mr Abe had hoped would cushion the impact of the tax rise did not work. It also raised questions about whether seven years of so-called “Abenomics” – a mix of fiscal stimulus, loose monetary policy and structural reforms – have done anything to make Japan’s economy more resilient to shocks.

“Negative impact from the consumption tax hike was much larger than expected,” said Kiichi Murashima, chief economist at Citi in Tokyo, who expects the country to enter a technical recession. “The outcome was completely different from the consensus view six months ago.”

“According to our retail team, the severity of the impact on department store sales [in the first half of February] was close to the one seen in the post-Lehman period,” noted Takeshi Yamaguchi, chief economist at Morgan Stanley in Tokyo.

Mr Yamaguchi cut his forecast for the first quarter of 2020 from 1.2 per cent growth to a 0.1 per cent contraction.

The data put pressure on prime minister Shinzo Abe and the Bank of Japan to mount a policy response.

Chief cabinet secretary Yoshihide Suga said the decline was not as bad as 2014, blaming typhoons and a warm winter for part of the impact on consumption.

“We’ll continue to examine the impact of the consumption tax rise and the coronavirus outbreak to ensure a suitable economic and fiscal policy,” Mr Suga said.

Consumption fell at an annualised rate of 11 per cent and was the main cause of the fall in output. But business investment also fell at a 14 per cent pace.

There was no real bright spot in the data. Final sales of domestic product, which strips out inventory movements to give the best reading of underlying demand in the economy, fell at a 6.7 per cent rate.

Mr Abe had vowed to avoid similar economic trauma to that caused by the 2014 rise in consumption tax with an elaborate set of stimulus measures, including a system of cashback points for spending in small retailers.

There were some signs that the measures had made shoppers less likely to bring demand forward to beat the tax rise. But it has still dealt a blow to consumers who have been struggling with low levels of real income growth.

“The beneficiaries from free kindergarten education and the point reward system are different to those suffering a negative impact from the tax rise,” said Mr Murashima, arguing the latter group cut back without the former spending any more.

After launching a large monetary stimulus in 2013, the Bank of Japan has become reluctant to ease monetary policy any further because it fears there will be negative side effects on the financial system.

It will now have to assess if there is any risk of a downward spiral in demand. Consumption by Chinese tourists has become important to Japan’s economy in recent years but tourism all but ceased following the coronavirus outbreak.

Mr Abe’s government has already launched a fresh fiscal stimulus to take effect this year, offering some support to demand but making it difficult to add any further spending or tax cuts in the short term.

1 Lockdown exit: How can Irish economy reopen without big health risks?
2 Deliveroo branches into grocery deliveries in Ireland
3 Coronavirus: The online scams, apps and trends you need to know about during the pandemic
4 Business owner waiting over a month for overdraft approval
5 Cold water poured on idea of ‘helicopter money’
6 Property market has not felt full impact of Covid-19, warns Sherry FitzGerald
7 Ireland’s financial reputation: this time it is different
8 Half of Irish SMEs expect revenue to fall by at least 60% in next three months
9 Q&A: Where do we stand on mortgage holidays and payment breaks?
10 Government announces €1bn in supports for businesses
Real news has value SUBSCRIBE