Are Donald Trump and Nigel Farage the products of societies unable to focus on the big picture? 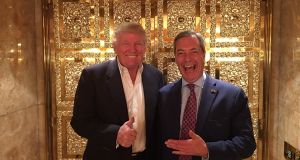 Two of the most successful economies in the world bred Donald Trump and Nigel Farage as the dominant politicians of the era, men who feed exclusively on grievance.

Fights over garden fences are all too common. It is said that solicitors make more money from boundary disputes than from any other source. Perhaps it should come as no surprise, therefore, to learn that the sudden departure of the chief executive of banking giant Credit Suisse involved a row over adjoining gardens.

It’s a fascinating story: a boardroom power play involving shareholders from around the world, executives paid beyond the dreams of avarice and local Swiss politics. These worlds brutally collided this week and culminated in the resignation of Tidjane Thiam.

According to various sources, the row started just over a year ago at a new year’s party hosted by Thiam. Bloomberg’s Patrick Winters, citing an unnamed source, has written about an insulting remark concerning the state of Thiam’s garden.

The source of the disparaging words was Credit Suisse’s then head of wealth management who, seven months later, left the bank. In September he began work for arch rival, UBS.

Amongst many lurid, and some tragic, revelations, it came to light that the wealth-manager was spied on after he left Credit Suisse (Thiam has both denied involvement and been exonerated). Anonymous bloggers seemed well informed during the saga, security consultants were hired and encrypted communication apps inevitably played a role.

Everything culminated this week with a board meeting that lasted nearly 24 hours. Fuelled by pizza (probably a first for some of them), the board decided that Thiam had to go. More formally, he resigned.

Like all real-life soap operas, there is much lurking behind the lurid headlines, some of which we know, much of which has to be left for speculation. For instance, like every war between neighbours there is history: one of them was, apparently, deeply annoyed about previous building works that had allegedly obscured his view of the lake.

Speculation has surfaced over the role of racism: Thiam is of French-Ivorian heritage; the Swiss are not immune to the suffocating parochialism of the village, even if it is one with global dimensions.

Many of us will take comfort from the fact that, in certain respects at least, the super rich and powerful are not that different from the rest of us. There are broader lessons from this saga that feature a deeper resonance than mere schadenfreude.

Most obviously, it provides an exception to the oft-quoted aphorism, “politics are more poisonous when the stakes are small”. While this is usually true for rows over garden hedges, it clearly doesn’t apply here. Multimillion dollar bonuses and hundreds, perhaps billions, of dollars of shareholder value were at stake, not least via the gyrations of Credit Suisse’s share price. In this case, the stakes couldn’t be higher and the politics couldn’t have been more toxic. But the original argument was over nothing much at all.

Fierce rows about trivia usually combine when the protagonists have too much time in their hands. The worst neighbours are often old, relatively well-off and bored. Historians identify large pools of unemployed young men as a necessary, and sometimes sufficient, condition for war.

The dangerous corporate executive is often one that has already achieved a lot, made a lot of money and now has some time on his or her hands. Credit Suisse’s row broke out after the bank had been successfully steered through a difficult time. Crisis often breeds co-operation. Calm waters can mean the crew starts to niggle, for want of something more interesting to do. It’s part of the human condition.

There’s also something weird going on in the heads of people who reach the top. Those who reach their goals, climb to the summit of Maslow’s hierarchy, rule their world. Alexander is said to have wept at the thought that he had nothing left to conquer. Many a rock star biography explains the descent into drug fuelled oblivion in terms of “Jimmy reached the top and found nothing there”. That thought can, I believe, explain a lot of C-suite behaviour.

In the absence of obvious stress and/or crisis, we have a tendency to focus on small things that annoy us grievously. Periods of stability and calm, instances of outright success even, breed the roots of their own destruction. Financial markets are the obvious example: stability becomes a kind of bubble that breeds the source of its own demise. The great financial crisis is an obvious contemporary example.

Political systems can also behave similarly. Two of the most successful economies – societies – in the world bred Donald Trump and Nigel Farage as the dominant politicians of the era, men who feed exclusively on grievance. All great lies come wrapped around a kernel of truth; there are genuine sources of annoyance and injustice. But the broader context somehow becomes invisible.

Ireland is not immune from this human tendency to focus on the smaller picture. Ireland has never been more successful; it’s never been a better place in which to live. Real problems do exist, easy solutions do not. But there is much more that the country does well.

Yet much of the political rhetoric seen in the general election campaign painted a near-dystopian picture of neglect and decay. It would be a real shame if the populist plague reached our shores. It’s another virus to worry about.